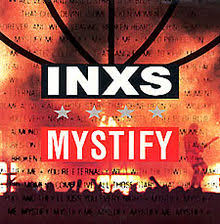 Michael Hutchence said he was not an intellectual. His lovers called him tender while others called him shy. He wanted to share the world with anyone who would indulge him. All this made him abundantly unique yet entirely co-dependent. Mystify: Michael Hutchence offers an enlightening portrait of the late legend but leaves out some simple yet crucial detail.

Director Richard Lowenstein has amassed hours of archival footage and images to show the life of Michael Hutchence, lead singer of the Australian band INXS. Much of the recordings used were filmed by Hutchence himself but also from other sources. Voice-overs from various people connected to the singer give an in-depth look at his childhood years, life on the road, romantic affairs and final days.

With his name in the title, Hutchence is the clear star of the film. It documents his life but also explores his character on a deeply personal level. Interviews with managers, friends, family and romances (done specifically for the film) are laid over archival footage. Notable interviewees are Kylie Minogue, Helena Christensen, Bono, Patricia Glassop, Andrew Farriss and Tina and Rhett Hutchence. This allows for an intimate portrait of the artist to form.

The footage is extraordinary. Most of it is personal videos from Hutchence but also from family, friends and lovers. Live concerts and television interviews help break-up that footage. The combination of the two show he was an inquisitive and caring person regardless of whether in or out of the public eye which is quite remarkable. The interviewees are very forthcoming and flattering. They all speak about Hutchence glowingly. Rarely is he or anyone in his life made to be the bad guy. Take that how you will. The music is obviously fantastic and while used copiously, it never gets tired.

Mystify has a huge issue with chronology and dating. For the most part it follows him from birth to death, but it does decide to jump back and forth randomly. Dates of major events are rarely shown and add to this confusion. Those who followed the life of Hutchence may be able to keep up however, it is challenging for those less informed. The emotional direction of the film openly takes precedence over the need to explore basic yet crucial information of Hutchence’s life. While the footage is all incredible, there is only so much. Repeats occur which ruin the exclusivity and originality of the tapes.

It is evident Michael Hutchence was uniquely special. Not just his voice and stage prowess but his thoughtfulness and compassion for others. The documentary highlights that successfully making it emotionally rewarding. While it may shroud some simple information, fans and newcomers alike will ultimately be spellbound by Mystify: Michael Hutchence.