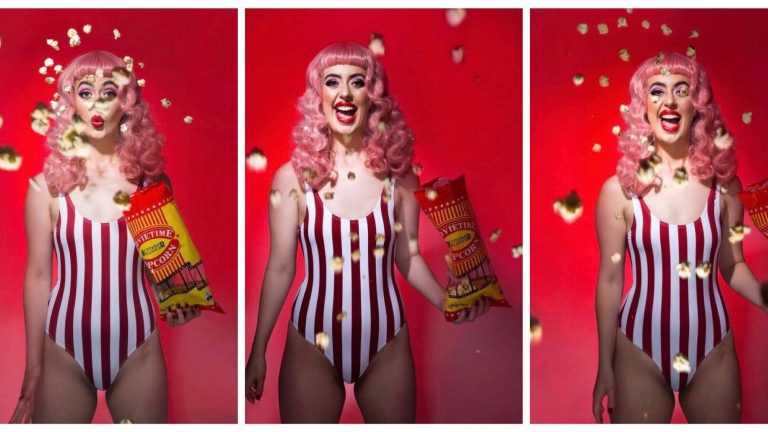 Netflix and Chill is a show that has humour, style and dinosaurs. This cabaret brought your favourite movie and TV character’s to life in a sexy, seductive way.

24 Moons Bar is the perfect venue for this show. Stepping into the venue whilst it is sunny outside you immediately are greeted by darkness. It takes a while to let your eyes adjust yet made for a very atmospheric, speak-easy feel. This performance is for a maturer audience with the occasional wardrobe malfunction.

Matt was the perfect MC, quirky and a bit dorky. Hyping up the show he raved of the queens of burlesque and cabaret that were about to come before you. We went from Edward Scissorhands to Maleficent. Every performer had amazing costumes, which is an odd component of a burlesque show as they are so desperate to take them off but every performer nailed their characters to a T. A particular favourite was Winter Greene who did a strip tease as Loki from Thor. Something that performers need to be aware of is that people in the back are virtually unable to see anything happening on the ground. There was so much cleverness and wit within the burlesque performances. Izzy Bellissima did a rendition of Edward Scissorhands which answered everyone’s question of what would happen if he decided he wanted to be a Burlesque Performer. Another unique act was Bella Nitrate’s popcorn, lip syncing to Bee Gee’s  ‘How Deep is your Love’, this romance with corn went to a unusual but hilarious place. After that the offer of free popcorn seemed a little unhygienic.

Tease Rex was one of the more voluptuous performers. This dinosaur stomped onto the stage with her fans and her little nipple tassels. Each act was highly entertaining, a little strange but it was nice to see performers clearly having fun with their acts and being creative.

The headliner Tara Leigh Dowler seemed a little out of place within the last set of the show. Her music was fun and cheeky but contrasted a lot with the short, raunchy burlesque that we had seen coming up to her act. Parodies of songs like “Quando, Quando, Quando” to “Kondo, Kondo, Kondo” in reference to the show ‘Tidying Up with Marie Kondo’ was a charming link to the cabaret’s theme of ‘Netflix and Chill’. It was cute and described nicely her love of the show. The song that went ” one boobs a little bit bigger” was relatable and set up a nice rapport with the audience yet some of the stories and links to her other songs were rambling.

Overall, the show is a great way to spend a Friday night and a great venue and you are bound to see something you have never seen before.