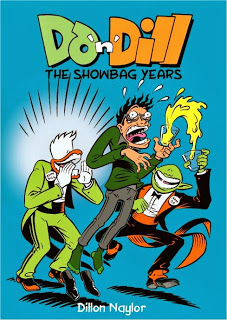 Dillon Naylor is an Australian cartoonist, illustrator and toy designer. He is the creator of the comic strip Batrisha the Vampire Girl, which appeared for six years in the children’s magazine K-Zone and was the basis for two children’s books. Other comic strips include Rock ‘n’ Roll Fairies, Total Girl and Camilla and Mike. Naylor’s comic series published through his own publishing imprint Cowtown Comics have included Da ‘n’ Dill (a long-running showbag insert, and a newspaper strip in the Sydney Sun-Herald. Pop Culture & Two Minute Noodles and the official Martin & Malloy comic. Naylor’s extensive work in designing and illustrating music posters includes work for the Beastie Boys and the Fireballs.

Nabila from Art Smitten had a chat to Dillion about is work and his involvemenet in Oz Comic-Con this year.