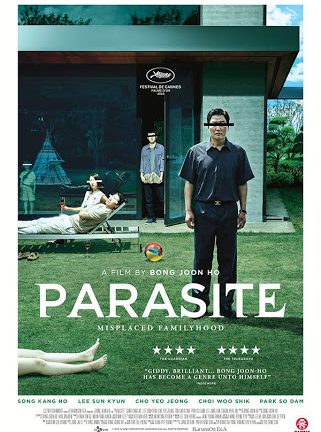 Family. We all have one; by birth, marriage or our own choosing. The Kim family is one united by blood and separated by lies. Self-described “tragicomedy”, Parasite uncovers the horror of human behaviour when striving for economic success in bizarre yet brilliant fashion.

Poor, unemployed and living in a semi-basement, Ki-taek and his family are in desperate need of money. When his son is asked to tutor the daughter of the affluent Parks family, they seize the opportunity to scam them. Their lives soon become increasingly intertwined with them until an unexpected incident occurs threatening their operation.

Everything about the acting is perfect. It is the gel that holds the film together. Song Kang-ho, Choi Woo-shik, Park So-dam and Chang Hyae-jin – who play Ki-taek, Ki-woo, Ki-jeong and Choong-sook respectively – interact wonderfully one might think they are actually family. Despite their deplorable actions, they make these characters completely loveable. Cho Yeo-jeong and Lee Jung-eun are standouts in the supporting roles.

Along with the acting, the success of the film is indebted to the screenplay by Bong Joon-ho and Han Jin-won. Within the first 5 minutes, you are drawn in and kept firmly in the grasp of the film. To label it as simply comedic or dramatic would be inappropriate because Parasite is so much more. Comedy can be cut by harrowing tension in an instant. Elements of horror appear and disappear at the will of the writers. While one fascinating story is being told on the surface, there are many others being told underneath. The actors juggle this with ease, making the changes in tone feel logically and deserved. All this creates an unpredictable yet immensely entertaining ride where the end is shrouded in mystery.

The superb technicality of the film provides the perfect environment for it to shine. Every frame is an image filled with style due to the stunning cinematography of Hong Kyung-pyo. No shot feels out of place or unnecessary. Music infuses scenes with whatever mood Bong wishes. Composer Jung Jae-il created an unnoticeable but highly effective score which – much like the script – can manifest tension or deliver levity immediately. Unlike the score, the sound effects are far more obvious and better for it. They add to the style of the film and make it more vivid. For the most part, the film is exceptionally paced. Editor Yang Jin-mo gives every moment and storyline ample time. None feel underexplored. Unfortunately, is does drag towards the end which sacrifices a more impactful conclusion.

Bong Joon-ho deservingly won the Palme d’Or for the film. He is able to creatively highlight societal issues with beasts or grand spectacle. However, he chose to abandon that for his twelfth outing and in doing so question whether the real monsters are simply humans. Parasite will burrow into your mind and deliver an incredibly puzzling yet undeniably gratifying experience for much longer than its two-hour runtime. You couldn’t ask for anything better.