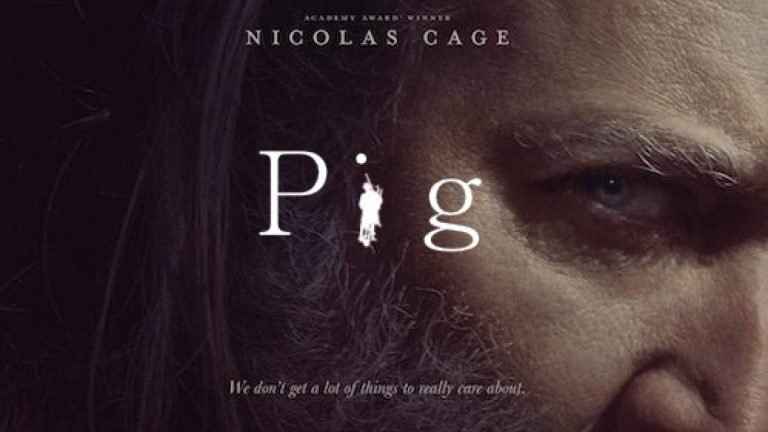 Who has my pig?

Nicholas Cage, Alex Wolff, a cute pig and copious amounts of drool-inducing food star in Pig, a patient and subtle reflection on loss and identity. As Rob Feld, Cage delivers one of his most restrained performances as a reclusive man of solitude; opting to live off the land alone with his trusty truffle pig, rejecting the suffocating pressures and expectations of the city and ignoring any semblance of polish and modernity. As another character puts it, he may as well be dead. His only lingering connection to the neighbouring city of Portland is Amir (Wolff): a young truffle dealer desperate to succeed. A desperation driven by a need to impress his cold father who looms at the apex of the city’s thriving luxury foods industry.

In the film’s early moments, Rob is attacked in his home with his pig stolen in a devastating scene of dizzying blows and deafening squeals. The film’s intentions are quickly set as a quest to recover his friend and life source. But rather than following the revenge arc and brutal action stylings of similar premises such as John Wick or another of Cage’s fantastic recent films Mandy, Pig takes a more nuanced approach.

The film’s true distinction comes in Rob’s experience being dragged back into the escaped world of his past and the gradual uncovering of our two leads troubled existences. Though seemingly as far removed from each other as a pair could be, we slowly recognise common ground in their individual struggles.

We find Robin in a deeply hurt state, one he’s clearly dwelled within for a long time. Through a surreal (and occasionally disjointed) journey guided by haunting relics of his past, he offers unsettlingly valid explanations of his exile: condemning the oppressive nature of capitalism, the fickle nature of humanity and a sick need to please others who care little of you. These heavy lines of thought and a deep dedication to his beloved pig create a troublingly emotional watch. Paired with some deliciously shot cooking scenes and dedicated acting present a memorable experience, not quite the finest of dining, but still very much a meal to remember.

Pig is out in regional theatres. It will be available to rent on numerous home video services from 20 October.