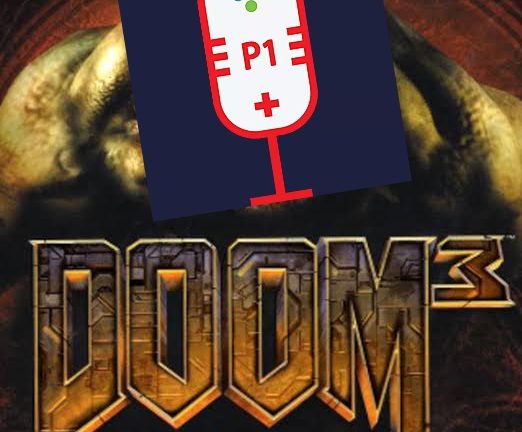 Doom 3 was a huge risk in many respects as it deviated from the established formula set by all the previous games with more of a focus on horror atmosphere which did create a level of divide amongst the Doom community at the time. But when you look at the game with 2020 vision it truly demonstrates how you can take tried and true elements and make it work with a new coat of paint.

Now with this change of style how does it affect gameplay? Well I can safely say that it benefits greatly, the tighter areas make each level more methodical to traverse as you never truly know which corner could have an enemy hiding in wait to strike. This most definitely creates the horror elements which in comparison to Doom 1,2 and the most recent reboot series can throw some fans off. That’s not to say there aren’t moments where you’re ripping and tearing through demons there definitely are more open areas but they aren’t as frequent, it’s definitely a much slower Doom game which relies on atmosphere and ambience rather than full throttle action.

Atmosphere is key in Doom 3, most of the game you’re battling through a large space station on Mars so most of the battling is indoors and in some cases you’re in complete darkness with only your shoulder mounted light, these moments create the most tension as enemies can hit you from any direction and jump scare you from out of nowhere. It adds a level of fear in the Doom franchise not seen since perhaps the Ps1 port which used more atmospheric music rather than the heavy metal soundtrack we’ve all come to love since the original 1993 game.

Weapons have been revamped too an extent to mixed results. Weapons like the machine gun, shotguns and plasma rifles feel both devastating and satisfying to use but lose some of the crunch over the originals, weapons don’t feel as satisfying. Which the biggest and badness weapon the BFG (I’ll let your imagination think of what that means) doesn’t feel as impactful and for the most powerful weapon in the game feels a bit unsatisfying compared to the previous games and especially when comparing to the modern series.

Demons have had a more realistic redesign with the Cacodemon being the most notable ditching from the beholder design from Dungeons and Dragons for something that looks like it’s out of silent hill with a more humanoid face. The pinky demon has also gone through a redesign in another situation where imagination will definitely run wild but as a whole most of the demons are similar to previous games but with a more realistic design.

I played the Switch version of the game and performance was definitely something that surprised me as this runs at 720p in handheld and can go up to 1080p in docked mode and runs at 60 frames per second. There can be some dips in larger areas on the map and tinkering some of the settings can both hinder and improve the framerate. This is the first real conversion of Doom 3 on a portable console, the first time Doom 3 has appeared on a Nintendo console and finally it is the first Doom game to release on a Nintendo console since the original Doom and Doom 2 were ported to the Gameboy Advanced back in the early 2000s.

Doom 3 for it’s time pushed PC’S to their limits and to have it on a portable console in hd and running at 60 frames is pretty impressive and another notch onto Panic Button’s belt. For any Doom fan you’d be remiss in not picking this game up on modern platforms as it’s reasonably priced with a 12-15 hour play time to boot so is a must purchase for both Doom fans and horror fans.