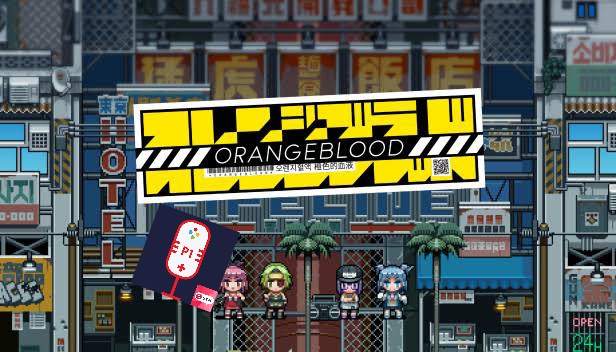 In New Koza 199X, off the coast of Japan, something sinister is broiling under the surface. After becoming a prisoner in the city’s gang war, Vanilla Vincent must complete a secret mission in exchange for her freedom. With ride-or-die frenemies, some sweet hip-hop tunes and an insane amount of firepower, can she survive long enough to reap her reward? That answer depends on how long you decide to tolerate the subpar mechanics, repetitive gameplay and confusing narrative of Orangeblood.

Most of the game plays out through active time battles that are incredibly easy. Before engaging, the enemy can be stunned allowing giving your fighters increased SP. Using any special attack will usually end the fight after one turn victoriously. However, boss battles are the exact opposite. Since they cannot be stunned, there is no extra SP to start with. For the first couple of turns, only basic weapons can be be used leaving you extremely vulnerable. Bosses can attack four times in one turn and easily annihilate the team.

While grinding levels can help, equipment is far more important. Along with their randomised buffs and debuffs, they can increase the critical rate and dodge chance which are integral to staying alive during battle. Levelling up is revealed to be quite redundant. Aside from increasing characters’ stats, there are no new special attacks to learn which just makes the grinding process much more tiresome and unrewarding.

Bizarrely, the 90s’ music aesthetic is advertised to be a defining aspect of the game but really takes the backseat. The soundtrack is adequate; nothing special. Some tunes are better than others (the jazzy Red Light District never got dull) but with only ten songs, they can get irritating after hearing them on repeat.

It is almost hard to believe there are so many problems (still more to come though) when everything looks this magnificent. The greatest strength of the game is its graphics. Exploring New Koza for the first time is an exceptionally rewarding experience. The city easily gives off that grungy megacity vibe with its huge night club, bright neon signs, messy utility poles, tacky casino and charming restaurants. There are plenty of little nooks and crannies to find. It makes starting the game super exciting.

When passing citizens, speech bubbles pop up offering some intriguing insight into their lives. They rarely offer side quests but when they do it makes the city feel alive. In this very basic instance, the worldbuilding is perfect and shows how much time and effort was made to make the game truly immersive.

Unfortunately, that clever attention to detail does not carry over to the main storyline and playable characters. When starting the game, slabs of text are cast over the screen giving vague details on the gang war, politics of New Koza and the assignment Vanilla is tasked with. Rather than sprinkling this information throughout the game to make it more digestible, they dump it all right at the start. The narrative becomes unnecessarily complex and only increasingly difficult to understand from there.

It does not help that Vanilla and her three companions are poorly writing and terribly unlikeable: sticking out like sore thumbs in their own story. At its best, dialogue elicits an eye roll and at its worst is totally cringe-inducing. Their cavalier attitude is jarring compared to those around them. It never feels like they are in immediate danger. To top it off, there are spelling mistakes and grammatical errors. That genuinely interesting, engaging and nuanced world the developers worked to create is undone by major missteps in the delivery of the main story and its characters.

Orangeblood is like an exquisite avocado with a massive seed inside it or the rosiest apple being eaten by worms. On the surface, it is beautiful: graphics are stunning and worldbuilding is extremely detailed. Unfortunately, the further in you get the less impressive everything becomes: repetitive gameplay, poor mechanics, convoluted story and obnoxious characters. There is an exceptional game underneath all the blemishes but it just is not enough to keep you digging in.

Review written by Player One Contributor: Ben Polazzon, thank you to Playism for the review code.