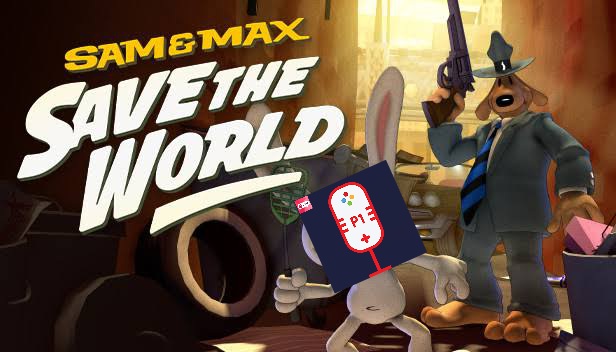 Gaming’s furry buddy cop duo is back, and they’re looking and lip-synching better than ever. The first season of the now-defunct Telltale Games’ take on Sam and Max has been remastered by Skunkape Games. Its original three season run first graced our screens between 2006 and 2010, and follows the adventures of Sam, a suit-wearing anthropomorphic dog, and Max, a vaguely threatening bunny rabbity-thing. Together, they’re Freelance Police.

The first season, later named Sam and Max Save the World, follows the Freelance Police as they crack cases which take them from a home for former child stars to the White House and beyond. The formula behind each episode is straightforward: Sam and Max are based in and around their office. Each episode, they’ll head to some new places and make their way back and forth between the episode-specific location and their own neighbourhood, exploring, hunting for items and chatting with a range of NPCs to an excellent soundtrack.
Gameplay wise, Sam and Max Save the World is the kind of somewhat rare 3D entry into the point-and-click genre Telltale was known for in its early days. In practice, it’s largely a case of locating and selecting the right assortment of items and set pieces to progress. Most of the puzzles aren’t hugely challenging (this isn’t quite a Sierra game), but there are a few headscratchers in there, and the vast number of dialogue options can easily have you barking up the wrong tree. For the most part, Save the World follows simple cartoon logic. It’s creative, but forgiving, and won’t have you stuck combining abstract inventory items or facing pointless game-overs.
The actual remastering here is artfully done. The aspect ratio has been upped to 16:19, a welcome change given the 4:3 aspect ratio of the original release. The audio is a treat, it’s been delightfully remastered and a few scenes have been re-acted. The lip synching is much more precise than in the original. There’s also a few new musical tracks, camera angles and exterior locations, plus a couple of other small changes to keep an eye out for. Plus, the character models have been lovingly altered in consultation with creator Steve Purcell.
I referred to my copy of the original a few times during this play through, and I can tell you that the graphics and lighting in the remastered version more than met my expectations. Great care has been taken here. That’s no surprise either – Skunkape Games LLC includes members of the original development team, and they’ve managed to bring the title into the present day, while still respecting and preserving the original game.
Some of the ‘episodes’ in Save the World are truly delightful – the one centred around a stuffed animal themed casino is a personal favourite. Some never quite get off the ground and the overarching themes can end up a little dry, but it’s the humour, coupled with the puzzle solving gameplay that really carries Sam and Max. As characters, they stand the test of time. While a few references are dated, the duo are as clever, witty and full of life as ever. If you’re new to Sam and Max, rest assured – there’s no shortage of great punchlines here, especially if your sense of humour favours the random and bizarre.
Of course, not every joke lands, and some of the recurring characters can get old quickly. The game tends to assign very specific ongoing comedic bits to each character, meaning that a few of them (in particular, a trio of soda-themed former child stars) are doomed to rehash the same middling-quality joke all season. But when this works, it works well. Constant career-changer Sybil Pandemik, and Bosco the (in)convenience store owner are both clear standouts, and they remain fresh, interesting, and amusing throughout.
Overall, Sam and Max Save the World is a joy to revisit. The changes made in this remastering are solid improvements, and despite a few weak plot points, the game still has plenty to offer both new and returning players.