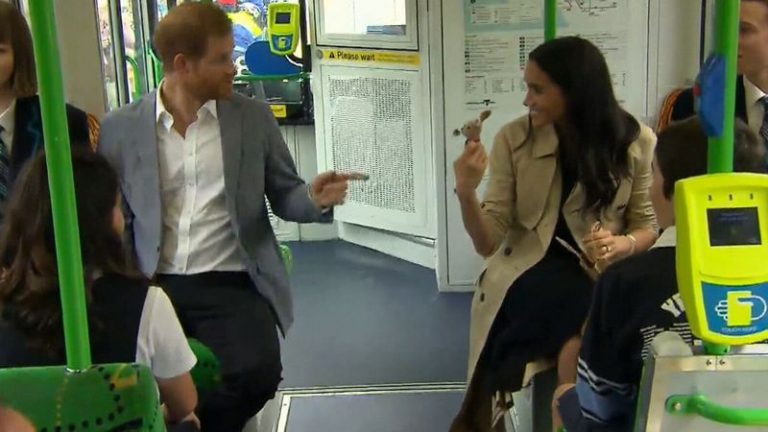 Prince Harry and Meghan Markle have followed in the footsteps of his grandmother, Queen Elizabeth II, riding a tram through the streets of Melbourne.

The Queen and Prince Philip took a ride on a tram from Federation Square to the NGV during their last visit to Melbourne in 2011.

Harry and Meghan hopped on the tram outside Albert Park Primary School for a short trip down St Kilda Road to South Melbourne Beach.

The Duke and Duchess of Sussex appeared happy and relaxed as they chatted with school children who joined them on the tram for the short five minute journey.

Tram driver Heather Pelly drove Meghan and Harry to the beach – says she teared up listening to the pair engage with the children on board.@9NewsMelb pic.twitter.com/a2pC0z2xqY

Meghan was stunning in a dark dress with gold buttons down one side, while Harry wore a grey suit jacket, white shirt and dark pants.

After arriving at South Melbourne Beach, the royal couple spent time meeting with volunteers from a local beach patrol program and learning about efforts to keep Port Phillip Bay beaches free of rubbish.

Royal Tour: The Duke and Duchess of Sussex, Harry and Meghan, have stepped off their plane in Melbourne. Live coverage on @Channel7 and @7plus https://t.co/EQNJ9h7K1h #RoyalTourAustralia #7News pic.twitter.com/7eicxGLQqM

Harry and Meghan touched down in Melbourne at about 10.45am on Thursday morning on a flight from Sydney Airport.

The royal newlyweds wasted no time in pressing the flesh at their only public appearance in Melbourne, greeting thousands of fans on a walkabout in the gardens outside Government House.

Harry and Meghan hugged, accepted gifts and shook hands with the throng of well-wishers lined up along Government House Drive.

After the royal walkabout, the couple attended a private reception at Government House, meeting with volunteers and youth leaders.

They also met with students at Albert Park Primary School, hearing about how the children pack “nude” lunchboxes free from plastic packaging, and volunteers at social enterprise restaurant Charcoal Lane in Fitzroy.

Harry and Meghan will return to Sydney this evening ahead of yet another full day of engagements – Harry will climb the Harbour Bridge, while Meghan will visit Bondi Beach – on Friday.