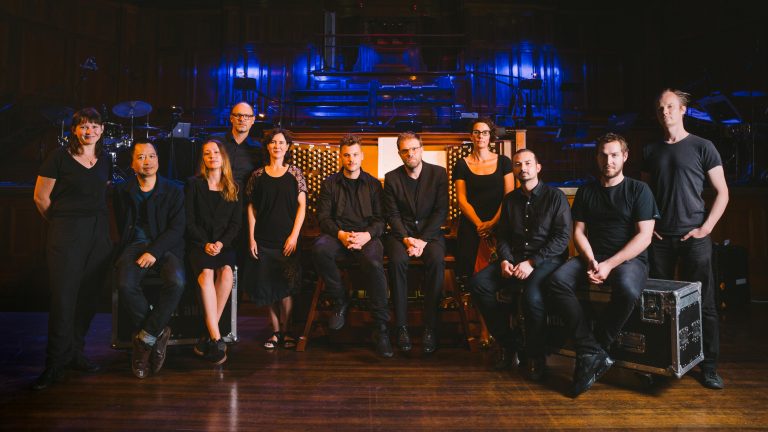 Adalya reviews the vibrant and experimental one-show musical event Exit Ceremonies performed by the Australian Art Orchestra and Ensemble Offspring. Adalya analyses the works of composers of Alvin Lucier, Austin Buckett and Simon James Phillips and their how their contrasting approaches to using the organ in their compositions influenced her experience of the performance.

On the 6th of February I had the pleasure of attending an exciting one night only performance of Exit Ceremonies at the Melbourne Town Hall. Exit Ceremonies was a collaboration between the Melbourne based Australian Art Orchestra and the Sydney based Ensemble Offspring that has been some time in the making. Both of these groups proudly “push the boundaries of music,” with the Australian Art Orchestra approaching this from a jazz background and Ensemble Offspring coming at it from the classical tradition, and this collaboration was no exception.

The performance featured commissioned works from three composers ­– two Australians, Austin Buckett and Simon James Phillips, and the well know American experimentalist, Alvin Lucier – all written with Melbourne Town Hall’s Grand Organ in mind. However, all composers used the organ in a thoroughly untraditional way, using a far more deep and otherworldly sound than perhaps most are used to hearing as well as integrating turntables into the otherwise what might otherwise have appeared to be a more traditional instrumentation.

The Australian Art Orchestra and Ensemble Offspring always imagined this concert to be in Melbourne Town Hall, and that strong connection of a performance to its venue was also reflected in the choice of composers, all of whom have played with how spaces and listeners can act as instruments in themselves. I have certainly played in concerts where upon arriving at the venue we had to drastically change the way we played so that the echoes of the space didn’t overwhelm the sounds of our intended performance. However, many works from composers featured in Exit Ceremonies are really built around embracing these resonances.

American composer, Alvin Lucier, is arguably most famous for his piece ‘I am Sitting in a Room,’ in which he records himself reciting a monologue, which he then replays and records until the result is these insane, ethereal sounds which he describes as the “natural resonant frequencies of the room, articulated by speech.”

Simon James Phillips has also played around with this in his album Chair. Whilst the pieces featured in the album are written for solo piano, the works were recorded with numerous microphones stationed around the space in order to capture not just the piano itself, but the way it resonated in the room. The result is rich, droning overtones – minimalism at its lushest.

To a certain extent Austin Buckett has also explored these ideas in his album Grain Loops, which consists of thirty one-minute loops created with a drum and sandpaper. To be honest, it’s pretty abrasive and a lot of the noises initially sound like power tools, but if you can get past it you do start to hear other sounds ringing in what was initially this quite brutal sound, which definitely very interesting and (in an admittedly quite abstract way) beautiful. With this, Buckett uses the listener’s mind itself as an additional instrument in the piece. Similarly to the way a word changes when repeated over and over, the loops slowly seem to change as your ears become accustomed to what they’re hearing.

Buckett’s piece for exit ceremonies, AISLES, also explored this with these chaotic loops which (based on observation) changed slightly every minute, and completely every 4 minutes. The slight changes made the piece really compelling for me, as I wasn’t particularly aware the strict form that dictated the movement of the piece, so it was hard to say what was a change in the way I was hearing the sound and what was a change in the sound that was actually being played. However, I think for others, it was just quite abrasive and the form it was written around imposed too much on how the piece was able to progress and hindered their engagement with the work.

The Phillips, FLAW, was my favourite of the night and probably the most listenable of the three works. The organic and synthetic were blended and inverted in a very strange and beautiful way, with the vocalist at times sounding like machine, whilst the turntables often almost felt like they were bouncing around the room like rain.

The Lucier piece, SWINGS, was to me very interesting both conceptually and to listen to. For the performance six pipes were removed from the organ and manipulated by hand to subtly influence their sound and the vibrations they put into the air. Like in the Buckett, often I was unsure what was actually being played, what was coming from the ways the soundwaves were interacting with one another and what was just a straight up aural hallucination. Again, I found this fascinating but I think others found it abrasive or honestly a bit dull after a while.

I really loved this concert; I found the music strange and compelling, however it definitely wasn’t for everybody. I noticed quite a few people get up from their seats and walk out and still more who simply didn’t return after the intermission. Others I spoke to enjoyed some of it, but felt it fell into some of the familiar traps of minimalism. Rather than being about paring something back to the essence of what is beautiful or emotional about it, the constraints and academic ideas behind the pieces were so strong that the music itself didn’t leave much for them to connect with.

That said, I really enjoyed the concert and would highly recommend giving Buckett, Phillips and Lucier a listen, and keeping an eye on any future concerts by the Australian Art Orchestra and Ensemble Offspring.