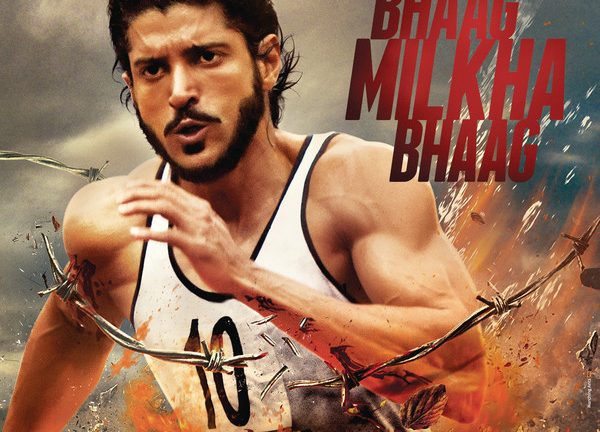 Rome Olympics 1960. ‘India’s heart beats,’ as Milkha Singh, ‘India’s Saint,’ and race favorite prepares to run the 400-meter track event.  The disarmingly attractive Milkha (Farhan Akhtar), stands before the crowd, gracefully exuding the kind of quiet confidence only possessed by the greatest of athletes. On the track he dominates, easily passing the other athletes with the finish line in sight. Suddenly, the image goes to shatters as Milkha’s dark memory of the India-Pakistan partition and civil war of his childhood resurfaces, losing him the gold medal that was ‘virtually in his pocket’.

This is the premise of Bhaag Milkha Bhaag, the film that has taken audiences from India and the world by storm – and is now screening at the Indian Film Festival of Melbourne (IFFM). Alternating between Milkha as a young boy (Japtej Singh) and his older self, who progresses from a thief, to army serviceman and athlete, Bhaag Milkha Bhaag is an exhilarating portrait of a tormented Indian hero who gradually learns to conquer the demons of his anguish.

Adapted from Milkha Sighn’s autobiography, director Rakeysh Omprakash Mehra approaches much of the material with the celebratory air typical of the sports biopic. Either accompanied with news headlines full of praise, or compiled into a montage, Milkha’s track runs are showcased frequently throughout the film, potentially to the point of losing their impact. However, Mehra makes up for it by including a stream of running sequences set off the track. One of the most notable is the beautiful scene of a young barefooted Milkha sprinting across scorching sand in pure delight on his way home from school.

Amidst the tributes to an undoubtedly superb runner, Mehra delves into Milkha’s story with reflective poignancy when handling his experiences of displacement and loss during the India-Pakistan partition. The setting of the refuge camp in the arid Indian desert was used well to delicately portray Milkha’s isolation, while scenes such the reuniting with his elder sister (Divya Dutta) brings tears to the eyes.

Mehra really does try to cover all ground with this epic drama, loading it with musical interludes, searing rivalries and generally well delivered comedy. What this does impose is a somewhat disconcerting run time at 186 minutes. Many audiences have quipped that the scenes in Melbourne should have been left on the cutting room floor, however Australia’s cameo is a welcome comic relief before the inevitable unfolding of Milkha’s nightmarish past. Each component of this film is entertaining, however the editing desperately needed to be more succinct. However enjoyable, many sequences were over long, for instance too much time was spent on Milkha’s somewhat inconsequential courting of his first love Biro (Sonam Kapoor). The inclusion of Biro in the film also begs the question, if Milkha’s first fling makes the cut, why doesn’t his wife, Indian volley ball captain Nirmal Kaur, ever enter the picture?

Despite the questionable editing and some story flaws, Bhaag Milkha Bhaag is a delightfully entertaining drama that is one of the more accessible family flicks of the IFFM. Farhan Akhtar’s dedication to the role of Milkha is as physically evident as it is emotionally. Akhtar delivers a wonderfully complex character, his portrayal of Milkha paints him as a dedicated, brave and cheekily loving man, who overcomes his fears for the good of his country.