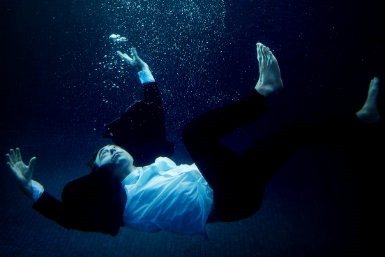 La Mama Theatre is an ideal place to host the Australian premiere production of Lars Noren’s Courage to Kill. This tense two-hander, sometimes three-hander, from Sweden’s most celebrated playwright definitely works best in an intimate venue. It is one of those many plays that take place entirely in a domestic setting, in this case inside a young man’s apartment that he is forced to share with his father. While in some plays this makes the home seem like a bigger, grander place for having been the site of so much drama, Noren, and indeed set designer Charlotte Lane make it feel as though the walls are closing in on its inhabitants, largely because those walls are covered in sticky-taped newspaper clippings that keep being added to. As the audience takes their seats, director Richard Murphet places the son, Eric (Luke Mulquiney) at his desk and has him sort through the clippings while smoking a cigarette, in the manner of the classic film noir detective. He might have the jaded look, the unhealthy lifestyle and the rotating roster of young female lovers, but he’s a self-confessed coward, and a waiter, though a very attentive one apparently. However, none of this hospitality is afforded to his new housemate. His usually absent father, Ernst (Stephen House) has fallen on hard times. With nowhere else to go, Eric takes him in, more as his prisoner than anything else. While Ernst tries to make up for lost time, Eric tries to heal himself by punishing his father for what those years of parental neglect have done to him. Much of the play is a dance between pointing fingers and self-blame, between hurling insults and self-loathing, as the pair of them are sickened by the weakness they see in each other, and even more so when they see that same weakness in themselves.

After the interval, Eric’s new exotic young lover, Radka (Tamara Natt), comes to have dinner with them, an event that Ernst has long been looking forward to. With fresh eyes, she witnesses how harsh Eric is with his father, and how manipulative Ernst is with his son. She hears how quickly calm words turn into snarls, which then turn into barking shouts, which then turn into a silence that is finally broken by more calm but wounded words. Their similarities are what strikes Radka the most. In the heat of the moment, Eric struggles to muster the courage, or the nerve, to do the right thing, while Ernst often can’t, or won’t, control his urge to do the wrong thing. Eric couldn’t save a woman he saw being violated because he hesitated before delivering that punch to the head to the man who was attacking her. On the other hand, Ernst, as Radka finds out, would have more likely been the violator. Either way, the same damage is done. She ultimately realises that she is not safe with either of the two sides of this terrible coin.

All three cast members do an outstanding job. House is perfect as the ageing failure of a parent who invites both pity and scorn. Natt gives an entertainingly exaggerated performance as the siren-like voice of reason who drives the true selves of these two men right out of their self-righteous exteriors. Malquiney seems also a few steps removed from realism in his portrayal of the unhinged son tormented by the need to make his father proud, even one as flawed and wretched as Ernst is.

However, despite the efforts of these fine actors, and the ominous sound design by Adam Casey, this production is inbuilt with a highly melodramatic ending that runs more on poetic logic than character believability, unlike the rest of the play, which is largely realistic. Perhaps it is a fault in Marita Lindholm Gochman’s otherwise solid translation of the original Swedish text, but this play’s abrupt conclusion just doesn’t feel earned. However, if Noren hadn’t forcibly accelerated the proceedings at the end there this production may well have outstayed its welcome. Courage to Kill finishes more or less after it’s said everything it has to say, which is a hell of a lot, and all of it is richly engrossing.