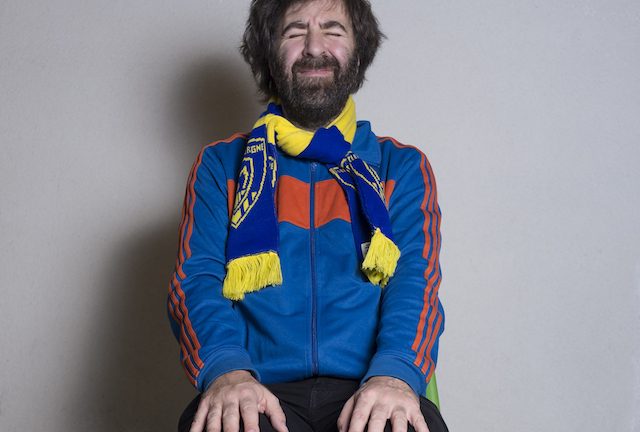 For those who haven’t seen David O’Doherty’s comedy before, like myself, if you decide to see him in action you’ll be greeted by one of the most refreshing examples of comedy in modern day times. O’Doherty blends his own down to earth comedic vibe with music seemingly created on the spot in front of the audience. He covers both the biggest issues that the world faces today such as the rise of fascism, to the smallest such as bad twitter sponsorships. It’s nice to see both topics handled off hand, putting a light touch on even the saddest of events our world faces today.

Performed at the Forum Theatre under a wash of blue, red and multicoloured lights, David O’Doherty keeps the crowd focused through his consistent switch between musical performance and stand up comedy, as he prances around the stage displaying his own brand of characteristics. You become so immersed in what he’s saying occasionally that you forget to notice him lying sideways on the stage, his legs splayed and in a state of obvious relaxation. This itself is hilarious, as O’Doherty is obviously a man who does what he wants, when he wants it, wherever he wants it. And of course, the crowd will follow.

There are never massive crack up moments from the crowd, but there doesn’t need to be. O’Doherty dishes out comedy by the second, meaning that there is a constant state of amusement in the air. Although not all of it lands, the nature of constant comedy makes up for this, as you’ll forget that you didn’t laugh at something within minutes. The star of David O’Doherty’s show perhaps might be his musical ability, or his little keyboard. The musical instrument brings a lot to the show, which would be lost without it. O’Doherty’s skill with the instrument is apparent as he blunders music on purpose for the gags, switching between singing and talking sporadically, which gives the impression of complete unpreparedness.

This skill is brilliant, as in your heart you know this is a show which is perfectly timed, structured and planned, however you just believe it too be completely improvised as he jumps from topic to topic to on the keyboard. David O’Doherty breathes a breath of fresh air into the modern day comedy scene, which in itself is amusing coming from a man who’s been in the game for so long, eighteen years to be exact.

This in itself shows his prowess in the sport of comedy, as he has perfected his own style of comedy, which no one else would be able to come close to mimicking. David O’Doherty’s Big Time is on till April 23rd at the Forum Theatre. He also has a children’s show Danger Is Everywhere on the 6th and 13th of April at the Melbourne Town Hall.