Review: Elizabeth Taylor is My Mother 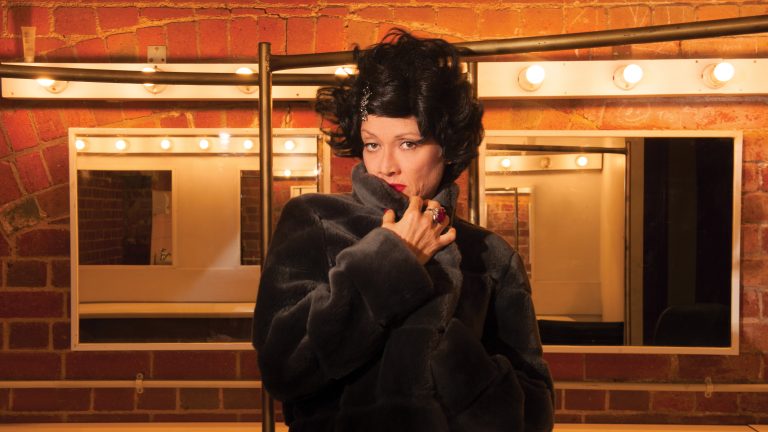 “Elizabeth Taylor is My Mother.” It’s more than just a memorable title here. In bringing to life a woman who claims that she is “Cleopatra Velvet Rosemond Taylor-Burton,” the adopted daughter of Elizabeth Taylor and Richard Burton, Suzie Hardgrave has really done her research as both the writer and performer of this dynamic solo piece. Those going in with almost no knowledge of the popular film star will be getting a crash course in her life and career. Even Taylor’s diehard fans might still be questioning what has been taken straight from fact and what is true only in the world of the show, or the world of the character’s imagination. When Hardgrave’s character starts to talk of the subjective nature of truth, of how truths can merely be stories that are retold often enough, and the creatively named “Tyrannorexia” that she suffers from, we suspect we have an unreliable narrator on our hands.

Hardgrave’s character’s real name is Susan, which gives quite a hint as to how autobiographical this show might be. Susan’s mental stability appears questionable from the outset. To enter the seating area the audience must walk past her crouched, twisted figure busily scribbling words on the ground with a piece of white chalk. The walls by this point have been similarly decorated, giving a distinct feeling of sitting inside her room in a psychiatric ward. Much of the opening (and the closing) of the performance is completely wordless and intensely physical. It takes quite some time for Susan to don her Liz garb and work up the courage to start speaking to the audience, largely due to the intimidating microphone that hangs suspended at the front of the stage. Once it disappears, however, and Susan no longer feels the pressure of speaking to large, invisible audience, she is able to speak quite freely to us. It takes longer still for Susan to take off her large sunglasses and let us look straight into her eyes.

With these various lunar-like phases of Susan’s character, Hardgrave has written herself plenty of rich opportunities to show her bravery, precision, and inventiveness as a performer. Her direct addresses and interactions in her audience are pulled off with a natural ease and her quick transitions between manic and mellow are seamless and always convincing. It can be very tempting to overindulge in contemplative stillness and silence, or to overplay mental instability, but these were pitfalls she mostly avoided. Her rare opening-night stumbles over the script were smoothed over by calling out “line” confidently and in character to be fed something she’d forgotten. It even blended in nicely with the scripted stumbles and requests to “start again,” like many of our favourite phoenix-like celebrities have been allowed to do.

Adoption, abuse, delusion, guilt, shame, pride, persistence, privilege, social invisibility – there’s certainly a lot that Hardgrave has managed to draw out of the story of Elizabeth Taylor’s life and work. When it ended, its first audience was left at quite a loss at how to respond. It didn’t feel right to jump straight into rapturous applause without us each taking a quiet moment to tie up those last few deep thoughts.