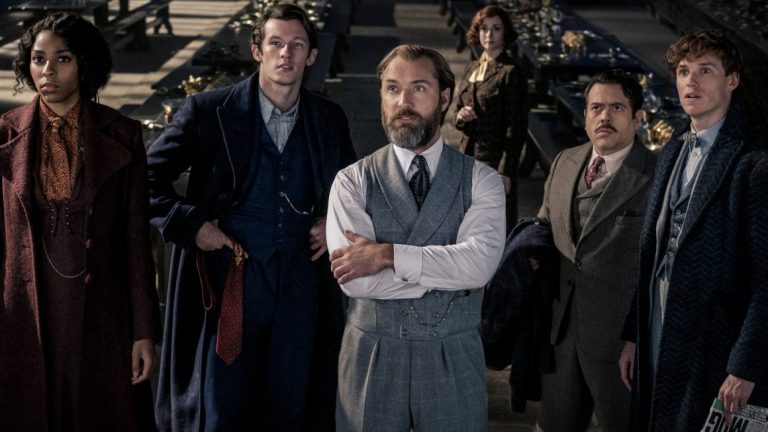 Fantastic Beasts: The Secrets of Dumbledore screening provided by Universal

“…Fantastic Beasts: The Secrets of Dumbledore (2022), sees the lack of a defined and focused story begin to show its cracks to a much greater extent, while sprinkling some wizarding magic in the midst.”

The Fantastic Beasts franchise has always had its back against the wall even with its rather enjoyable first entry, Fantastic Beasts and Where to Find Them (2016). This is perhaps due to having lots of expectations to live up to from a die-hard and plentiful Harry Potter fanbase breathing down its figurative back. But more than that, the source material is derived from a guide book that serves as an afterthought, rather than a fleshed out set of novels. The latest entry, Fantastic Beasts: The Secrets of Dumbledore (2022), sees the lack of a defined and focused story begin to show its cracks to a much greater extent, while sprinkling some wizarding magic in the midst.

Set in the aftermath of the less than memorable and messy Fantastic Beasts: The Crimes of Grindelwald (2018), the focus this time around shifts to the Headmaster of Hogwarts, Albus Dumbledore (Jude Law). In what plays out like an origin story charting Dumbledore’s tumultuous history with Gellert Grindelwald (Mads Mikkelsen), the fantastic beasts and protagonist-turned-side-character Newt Scamander (a less brilliant Eddie Redmayne) take a backseat in this battle of the brutes (or “former partners”) tale.

The introduction of a new mythical beast, the Qilin (pronounced Chillin) is perhaps the most profound aspect of the film. The Qilin serves as a contrived plot device that both aims to keep the whole ‘fantastic beasts’ vein of the franchise flowing while also being the single most important part of the film’s events. The fawn-esque beast has the ability to see into a person’s soul and determine if they are pure of heart; its role is to essentially act as a deus ex machina that keeps the characters on-course narratively, as this beast will choose the purest of heart to lead the wizarding world. Grindelwald kills and revives (through some dark magic) what he believes is the only Qilin in existence, but he is unaware that a twin was born alongside it. It is up to Dumbledore and his troop to make sure that this twin makes it to this Qilin election ceremony and chooses the wizarding worlds leader without being tainted by Grindelwald.

For what it’s worth, Mads Mikkelsen fills the ever changing casting boots of Grindelwald expertly — with Colin Farrell initially in the role before being replaced by Johnny Depp due to other scheduling commitments. Given the strange situation leading to Johnny Depp’s forced withdrawal from the role, which posed uncertainties around the state of the production, Mikkelsen brings a much more sinister yet measured performance to the evil wizard that just wasn’t felt with Depp’s more caricature like performance. The same can’t be said for a majority of the ensemble, with lots of thin character arcs and just really uninteresting characters compared to the more well worked characters and memorable performances in the Harry Potter films.

It’s clear that the Fantastic Beasts films have had a wavering focus, with J.K. Rowling and director David Yates taking multiple directions story-wise in these first three films (of a supposedly planned five). When Harry Potter and the Philosopher’s Stone (2001) first graced our screens just over 20 years ago, it introduced audiences to a world teeming with possibility: magic, spells, wizards and witches, and an ensemble (young and old) that worked in unison from the first film to the last. More importantly though, that leg of the franchise never lost sight of its titular character, Harry Potter himself, always anchoring everything around him.

With The Secrets of Dumbledore, you’re left scratching your head by the closing sequence due to strange choices in character development and a script that feels like it is juggling a multitude of ideas, but all at a surface level. Rowling tries to weave multiple storylines throughout her screenplay and it’s clear that her writing skills are more suited for a novel where that amount of detail can be stretched out and refined.

While there are glimmers of magic felt in these two latest Fantastic Beasts entries, the storytelling doesn’t match the visuals — with too much going on and too little that’s worth caring about. At once, the film feels like a story about Dumbledore’s origins, Newt and his beasts, Credence and his inner demons, and the side characters with their little stake in it all.

It’s hard to know what the future holds for a franchise that hasn’t taken the same amount of care in building its story up as its predecessor. If there are to be five films in total, the first three have missed the opportunity to anchor their focus around their fantastic beasts, with the Qilin serving as the first real return to that aspect of the franchise — albeit in the midst of too many clashing storylines. The magic of the wizarding world is still as desirable as ever, it just needs the support of the magic that comes with a serviceable plot and narrative.

Fantastic Beasts: The Secrets of Dumbledore opens nationally from the 7th of April, 2022.