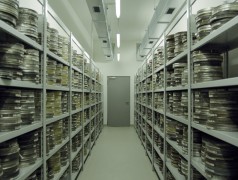 The first thing director Felix Moeller wants to show us here are the thousands of piled canisters containing celluloid reels of Nazi propaganda. Given that celluloid is extremely flammable, it would not take much at all to set these huge hidden stores aflame. Given that anti-Semitism still exists in German society (and indeed in many other countries) it seems it would not require much exposure for these films to spark more racial and religious discrimination than there already is. That, at least, is the reasoning behind the ongoing ban on these films by the German government. Currently, these infamously gripping cultural artefacts are locked away in the archives, accessible only to authorised scholars and those who attend special educational screenings. Context is everything, and many fear that with general distribution these films could too easily fall into the wrong hands and have a dangerous effect.

The recorded audience reactions from these contained screenings are fascinating to hear. Many say that, despite what they know about the Nazi party, they found themselves momentarily seduced and persuaded. Movies are famous, after all, for their sense of escapism and that magical suspension of disbelief. Moeller provides copious amounts of footage from these films; enough for us to see how eerily they blend in with any other entertainment pieces from the late 30s and early 40s. And these are the comments of those who have been educated. Can you imagine what might happen if these films were released to the general public?

Actually, you wouldn’t have to. The internet has become a hotbed for Nazi propaganda, particularly YouTube, where many of the banned films can be found. One of the interviewed German film experts observes that even when banned, films can still send out a message. People wonder why they are forbidden to see them. They wonder what the government is trying to hide. The truth, perhaps? A truth the people in charge would rather not face up to? If these films are so blatantly full of lies, then what’s the harm in showing them?

Could there even be harm in not showing them? Out of all the arguments heard from both sides of this labyrinthine debate, I felt the most definitive opinions came from a handful of holocaust survivors who attended a screening in France. To them there was no doubt that the ban should be lifted. To them it was crucial everyone view and dissect these abominable masterpieces so that all their tricks may be laid bare, and rendered powerless on future generations. The people being demonized really ought to have the final say in how these films are distributed – yet even they can’t seem to agree. Many think no one should see them, many think that everyone should see them, both for the same reason: they are disgraceful displays of extraordinary German talent being shockingly misused. A final, very interesting addition to the mix is a section exploring the movies banned for sanctioning euthanasia. A very progressive and libertarian idea has been snatched up by the wrong hands, it would seem. Are these films disguising the murder of the elderly, the sick and the disabled as giving them the peaceful, timely death they want and deserve?

The second comment that stands out amongst all the back-and-forth reasoning comes a from a young film student who notices the propaganda that’s still hiding in popular films today: which racial groups are now so often the villains in Hollywood action films?

Forbidden Films is structured very much like a debate, with arguments and counter-arguments constantly coming from both sides. As such, the negative side gives the final answer to that devilish question: should these films still be banned? It might have been better to end on the left-of-field euthanasia segment, but I’m sure some would have found the concluding summary helpful. On balance, I think Moeller probably agrees that the ban should be lifted, but this certainly isn’t a propaganda film about propaganda film. One could just as easily come out of this feeling determined to keep those explosive films locked away for good.

Forbidden Films is screening as part of the Jewish International Film Festival, in Melbourne and Sydney March 12-25.