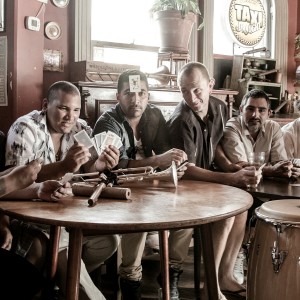 On Friday night I danced to the rhythmic genius of Quarter Street, one of Melbourne’s hottest Salsa bands, as they performed in the first of three “House Parties” at the heritage-listed Kew Court House. Spoilt with a dance floor rather than a seated concert, the audience took full advantage of the space in the former courthouse and police station.

Quarter Street champion the gritty sounds typical of the Salsa Dura, a style developed in 1970s New York by the Puerto Rican migrants. Unlike its brother, Salsa Romántica, the Salsa Dura is less polished and demands a more darling sound, especially from its brass section. Quarter Street did not disappoint in that respect. Lazaro Pompa, on trumpet, along with Ben Gillespie and Jimmy Bowman, on trombones, commanded the stage with their explosive fanfare. They jolted the party to life with quick bursts of notes, bending them around the beat.

The boys melted these vibrant melodies with their dynamic rhythms, charming the audience into swaying along with the music. Leo Salvo, on the güiro, Luis Poblete, on the congas, Cris Saavedra, on the bongos and cow bell and Sebastian Orellana on the drums, maintained a tight beat. However, this wasn’t the end of the rhythm section. Cesar Saavedra, on double base, along with a mysterious pianoman reinforced the beat through their melodic instruments and created that distinctive salsa sound. Together, they formed a smooth unit which balanced instrumental breaks and vocal sections.

With that, who could forget the vocals of Sergio Botero, along with Salvo and Poblete. Their deeper tones cut through the higher pitches of the brass section, giving the songs a richness. To suggest they are simply singers would be selling them short; they are best described as entertainers. Botero’s spirited dancing was infectious and drew the crowd from the comfort of the walls to the open dance floor.

Quarter Street closed their two-hour performance with Tumba la Caña Jibarito, or Grave, Beer, Sandwich. They called for the audience to revel in the hedonistic pleasures given to you in the moment, especially due to the inevitability of death. Both the sound and sentiment resonated with the audience, and a majority of the crowd tossed away their insecurities and dared to dance for the final song. The way I moved could only be described as a balter; an archaic English word which means to dance without art or skill, but with great joy and enthusiasm. However, it is important to note for those of you who also balter around the dancefloor, that this did not affect the quality of the night. Whether you are a seasoned salsa dancer or owner of two left feet, Quarter street will persuade you to shake off your inhibitions and allow their beat to flow through you.

The Kew Court House will be having two more House Parties, starring the 8-piece Melbourne band, Papa Chango, who merge together afrobeat and psychedelic guitar, and Melbourne based Mariachi Los Romanticos, who blend Mexican folk and pop with Spanish lyrics and Latin rhythm. Papa Chango will perform on the 29th of July and Mariachi Los Romanticos will perform on the 26th of August, with doors opening at 7pm. Tickets are available online at the Hawthorne Arts Centre website. However, if you’re interested in catching Quarter Street, check out their next gig at Open Studio in Northcote, on the 22nd of July at 9pm or find them playing at The Night Cat in Fitzroy.