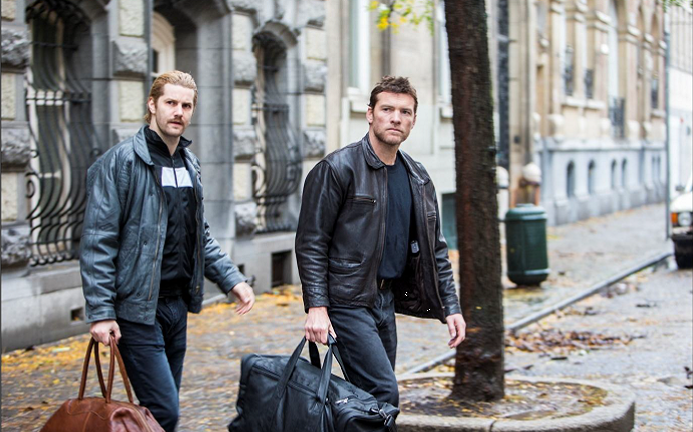 This is what wealthy businessman Mr Alfred Heineken (Anthony Hopkins) tells his masked kidnapper, Cor van Hout (Jim Sturgess), at the critical stage of the crime. Wise words indeed, but will the young criminal take heed? The ransom amount certainly is a lot of money. If Cor can pull this off, it’ll be the largest ransom ever paid, and there’ll be plenty to share with his four best friends and partners in crime. That’s a combination that doesn’t look promising in this gloomy true story from 1983, adapted from Peter R. de Vries’ journalistic account of the shocking affair.

Being based in truth doesn’t much alter the experience. You notice it when end title cards satiate our curiosity about where these characters have ended up, but otherwise Kidnapping Mr Heineken plays out like the familiar fun little crime thriller with a cautionary edge. We have our usual team of the likeable hot-headed man-child (Cor), the endearing baby of the group (played by Thomas Cocquerel), the good-natured realist (Mark van Eeuwen), the hardened realist (Sam Worthington) and the well-meaning family man (Ryan Kwanten).  All five men are perfectly cast and have convincing chemistry as a group of close friends. At every turn you at least understand the position of each one of them, even when they cease to be sympathetic.

Director Daniel Alfredson sets up their situation very effectively. In theory, snatching a billionaire and taking home a small portion of his wealth should have been a clean and harmless exercise, and the perfect solution to their financial woes. They don’t have to become ruthless criminals in order to pull this off, but they do have to act as they though that’s what they are, if the police and Heineken’s family are to take them seriously.

The savvy Heineken feels he is in a similar position. Until he knows exactly what he’s dealing with, he knows he has to play the part of the unshaken old-timer willing to make a deal with the ambitious young masked man who comes to check on him in his cell. Cor is careful not to speak a word to the discerning Heineken, but his face, even beneath the mask, occasionally betrays secrets to Heineken as the older man bravely tests his captor. It’s not that Heineken isn’t worried, but he is a master of keeping his cool during Cor’s visits. When alone in his cell, Hopkins gives us a good look at Heineken’s deeply felt fear and uncertainty.  Hopkins has played plenty of sharp-minded characters who never lose their cool in dangerous situations, but here he acts more as though he’s in a realistic drama than a stylish thriller.

In this kind of movie though, this character is right at home. Kidnapping Mr Heineken is a taut, tight thriller (95 minutes is the perfect length) that draws freely from its true story origins to give it an extra edge.

Kidnapping Mr Heineken is in cinemas from March 12.