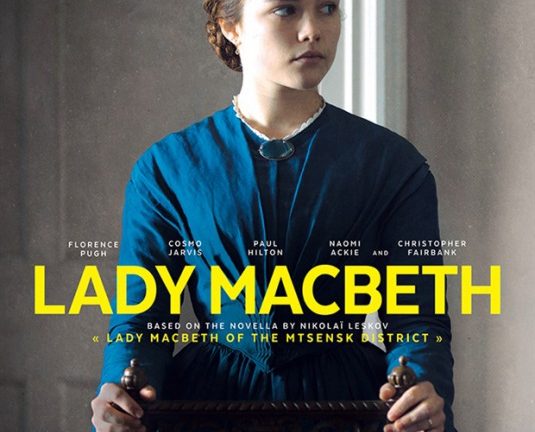 Lady Macbeth is the debut film by William Oldroyd, written by Alice Birch and based on the novella Lady Macbeth of the Mtsensk District by Nikolai Leskov. It’s set in the mid-19th century, though it transposes the original narrative from Russia to the Northern English moors.

The film stars Florence Pugh as Katherine, a young woman who enters into a loveless marriage with an older industrialist. He gives her no attention, and when he leaves for a business trip she looks to one of her husband’s workers, Sebastian, played by Cosmo Jarvis, for the affection she so desperately needs. Soon after, however, things turn harsh and murderous, putting into motion events that earn Katherine the unspoken fitting nickname of Lady Macbeth.

Shot by Melbourne cinematographer Ari Wegner, the camerawork, which alternates between still and handheld, has an effective but obvious role of mirroring characters’ emotional states. The colour palette is also suitably cold except in the more tender moments between Katherine and Sebastian – even the poster features Katherine in a long, piercingly blue dress. It also has some very interesting ways of dealing with space. We never see the front of the house and indeed most of the action takes place inside with Katherine looking out through the windows.

In fact if I have any criticisms about this film it’s that most of it seems effective but obvious. The puritanical, patriarchal setting of mid-19th Century Britain, for example, is an easy conduit for its necessary statements about gender politics. However, Oldroyd and the rest of the cast and crew should be commended for creating a tense and modestly troubling film.

A solid and promising debut, Lady Macbeth is in cinemas now.