Review: Land of Mine 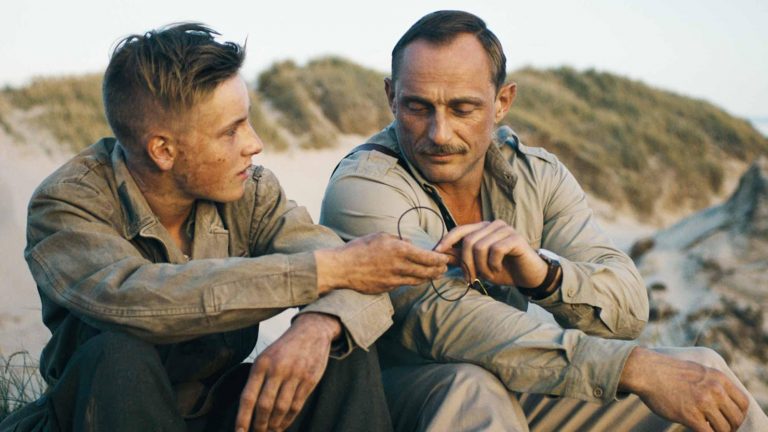 This year, the Scandinavian Film Festival is leading with what might sound like just another World War 2 movie, but is one that actually turns the tables the tables on a lot of its predecessors. The Danish film Under Sandet (literally Under the Sand), is a drama set in post-war landmine-ridden Denmark and is being released internationally with the English title Land of Mine, a rather unfortunate, hopefully accidental pun on an obviously serious issue.

It’s easy to see why the second world war is still a cinematic staple. The Third Reich, and its soldiers, remain the definitive example of what hateful extremism can lead to, and what we all want to avoid becoming. No film has ever had to work especially hard to characterise Nazi soldiers as villains.

It is curious, then, that in Land of Mine, these supposedly evil men appear in the form of scared, defeated young boys who just want to go home. Of course, as prisoners of war from the losing side, some are wondering if they’ll even have much of a home to go to once they’ve been released. The ones that handled the landmines are being made to remove all 2.5 million of them from the beaches that they buried them on. Danish Sergeant Carl Rasmussen (Rolan Møller) is given a group of 14 German soldiers that are to dig up and defuse thousands of unexploded mines before they are allowed to go home. In a damaged country that has just been freed from German occupation, its German prisoners have become the lowest class of people. Sergeant Rasmussen and his fellow officers beat them, starve them, mock them, and deny them any medical attention, until it is too late.

The boys all find various ways to deal with their plight. Ludwig Haffke (Oskar Bökelmann), their leader, appointed while the war was still being fought, has resigned himself to the totality of their defeat and ultimate ruin. Most of the others are more hopeful, and spend their time talking about what they’ll do when they get home and the lives that they will lead. Twin brothers Ernst and Werner Lessner (Emil and Oskar Buschow), seeing a country in need of rebuilding, plan to start up a bricklaying business, called Ernst, Wernst & Sons (even though the sons haven’t been born yet). As tends to happen with twins, especially identical ones, their connection is strong. Ernst also shares a sort of big-brotherly bond with the little girl from the family farm that is next to the hut in which the boys are locked up every night. For Nazis, they seem to have an incredible capacity to love.

The real, unspoken leader of the group is now Sebastian Schumann (Louis Hoffman), a boy with a quiet maturity that is well beyond his years. He deals with the danger by taking control and becoming the protector.

The sergeant manages to do this dirty work by reminding himself of what these boys were party to and detaching himself emotionally from them, until they have their first casualty, and he sees just how much of himself there is in Sebastian.

As for the other characters in the Danish military, writer/director Martin Zandvliet doesn’t quite afford them the same complexity and dynamism. Rasmussen’s superiors, namely Lieutenant Ebbe Jensen (Mikkel Boe Følsgaard), are painted as the cold, ivory tower authorities in this narrative, while the Sergeant has a very different point of view from working on the ground. However, Zandvliet is not about to deny that Ebbe has a point when he tells Carl “You have no idea what they have on their conscience.” Of course, the audience of Land of Mine has much more than merely an idea of what these 14 boys might have done. They can also see as well as anyone that the Danish officers have their own people to protect and a country to rebuild. With not even enough food to feed the people of Denmark, why give any to the Germans? Someone has to clear the mines, so why not the people who put them there? Why risk the lives of people who had no involvement whatsoever with the atrocities committed by the Nazi party in cleaning up their mess?

Still, in cinema, murky misdeeds done offscreen seldom match the raw victimisation that takes place onscreen. The prior actions of these boys is left to the imagination, one that is more fuelled by their heartbreaking pleas for mercy than anything else. One has to wonder how much choice some members of the Hitler Youth generation really had in the part they were playing in all of this. By allowing us to spend time with this small company out of an enormous group of prisoners, Zandvliet makes it very hard for anyone to see a way that placing children in harm’s way, even Nazi children, can truly be the answer to anything.