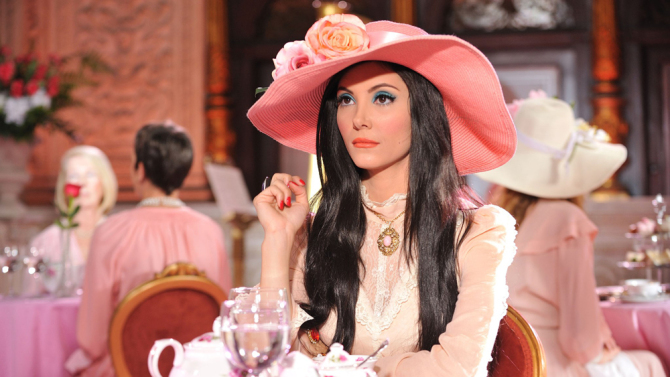 The Love Witch is a 2016 release written and directed by Anna Biller. It follows the story of a young beautiful witch Elaine, played by Samantha Robinson, who uses spells and potions to make men fall in love with her and ultimately kill them. The movie itself is shot on 35 mm film and is visually a homage to technicolour 1960s and 70s sexploitation cinema. The use of this film gives the movie a soft visual quality and sort of decentralises it in time – this is emphasised by the 70s costuming but with modern cars and mobile phone technology.

The film opens on Elaine driving away from San Francisco with her narrating how she had to leave after the overdose and death of her first husband. This scene uses rear projection photography to film her driving from the bonnet of the car – much like in Hitchcock’s The Birds. This allusion to a period thriller and the blood red of her car, outfit and lipstick suggest that there in something sinister afoot. She is then pulled over by a police man – raising the tension of the opening yet again – but he only informs her that her tail light is out thus returning the scene to a state of calm but with a sense of foreboding none the less. This is just the first example of director Biller playing with the audiences expectations to create the suspense that permeates this thriller.

Elaine has left San Francisco to stay at her friend Barbara’s apartment, who is also a witch, and is met there by Trish the real estate agent and they go out to tea together. Both the apartment and the tea parlour are absolutely beautiful sets. The apartment is painted in bright blues and purples, the walls are covered in paintings of witches in rituals or tarot inspired scenes. The tea house interior is pink – pink walls, chairs, tables – and all of the customers including our protagonist and her friend are costumed in pink and lace. Both of these sets are deeply feminine and visually represent the female world in which men are only visitors or are absent all together. It is here that Elaine tells Trish that she knows what men truely want and is willing to do anything if she can find a man who loves and worships her. She seems obsessed most of all, not with men, but with love – the idea of being in love and being loved.

She soon meets her first victim – A university literature professor and self confessed womaniser Wayne – she doses him with her love potion and seduces him causing him to fall deeply in love with her. However, the effects of the potion escalate out of control and it seems the concoction was poisonous and he suffers a heart attack and dies. In the scenes in which Wayne has been dosed the cinematography employs kaleidoscopic effects on the lights and on Elaine which aside from being beautiful are also a throwback to the 70s that really add to the charm and the feel of the film.

Wayne is the first of her 3 victims and they only get grislier as she goes along – the finale involving police questioning, horseback riding and a staged wedding at a renaissance fair.

Samantha Robinson does a fantastic job as Elaine in an acting style that is somewhat out of date and out of favour in modern films. Sure Elaine is villainous, but also in this ultimate battle of the sexes you cannot help but be on her side. She is the perfect performance of femininity and she punishes and destroys those men that privilege her for it. Witch craft in this film is a symbol of feminine power synonymous with sexuality – perhaps as a metaphor for sexual liberation in which women desire sex and to be loved but do not necessarily care about the men themselves. This is a surprisingly enjoyable feminist twist on the sexploitation and camp horror genres and enjoyable by anyone with a sense of cinematic nostalgia.

The Love Witch is being shown at the Lido Cinemas in Hawthorn from the 16th of February until the 1st of March.