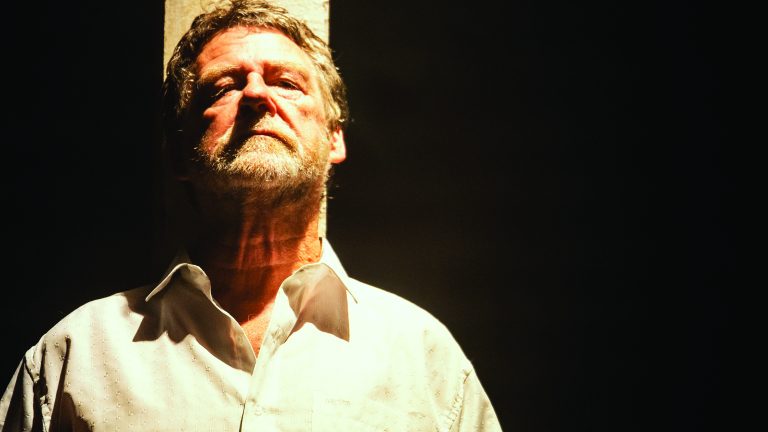 The theatre lights dim and paint the branches at the back of the thrust  stage in a soft sunset glow, all ready for the arrival of our bawdy, secretly observant narrator, Eileen (a hilarious Kelly Nash) here to welcome us to the remote town of Meekatharra. She jokes about herself, her kids, her husband, her work (the usual hodgepodge of jobs that can be found in a small town, which happens to include fire-fighting), and, of course, where she lives. It’s the kind of region that’s so spacious but feels horribly claustrophobic, especially given that the first other character we’re introduced to is a domineering ocker middle-aged white man ini a position of power, with more than a little in common with Mick Taylor from Wolf Creek, and more than a lot in common with the real principal of Meekatharra School of the Air, John McHale. Kevin Summers easily inhabits the highly suspicious and unnervingly calm principal of the only school in the area.

After Principal John McDonald’s proud domain is set on fire twice, all while thousands of government funds continue to disappear unaccounted for, the Department of Education decides it is time to send an auditor, a man named Kevin (played by the delightful Keith Brockett) who works well with numbers but is far too eager to please when it comes to people. Kevin is half the age, three quarters of the height, has an eighth of the outward confidence and is of a different race to the man he has been brought in to investigate. As you might expect, they clash much more than the typical pair of city slicker and townsman, but Kevin is certainly not alone in his disdain for John. While many of the staff and parents turn a blind eye to his dirty dealings, put up with his ignorant prejudices and reap the rewards when they happen to come their way, the handful that feature here as characters frequently test him, particularly the new English teacher, Tiffany (Christina Costigan) who is infuriated by his gross misalignment of priorities, to say the least.

These tensions all sit, fester and occasionally boil over during the first of the two longest scenes in the play: a very awkward barbecue on the night that Kevin is staying. Naturally, the two female teachers (the other played by Claire Pearson) are fed up with John’s sexist attitudes, while he and the PE teacher (played Liam Gillespie) butt heads at the slightest threat to the principal’s fragile masculinity.

However, John has never clashed with anyone as aggressively as he has with Kevin.

The next morning, as the young auditor closes in on the school’s internal cover-ups, John attacks Kevin mercilessly with a hammer, and very nearly kills him. After the authentic naturalism of the barbecue scene, this second long scene is where Dan Walls’ writing and Shaun Kingma’s directing takes a more stylised turn. They use the old trick of revealing the incident through monologues in the form of court testimonies, which does at times feel clichéd and forced, but it does enable the telling of the different versions of events. Given that the real John was found not guilty after claiming self-defence and that such graphic scenes rarely look believable on stage, this choice does lend the play more credibility.

What also helps is that while the characters of Kevin and Eileen could have just been hackneyed retreats, they have many scenes that set them apart from other examples of these archetypes. Eileen is a genuinely funny and plausibly knowledgeable narrator. She is much more of a stand-up comedian than an omniscient storyteller, but her final exasperated gesture is rather heavy-handed. Similarly, Tiffany is a very engaging rival to the self-righteous principal, but sadly Costigan’s overacting of her final moments on stage, the actor’s only miscalculation, does rob them of much of their power.

Brockett, on the other hand, applies just enough throttle to Kevin’s comical entrance as the bumbling anti-John, and then wisely pulls back as the character starts to reveal more of what he is made of and what he has gone through in his life. As it turns out, you could well say he is the wisest and strongest person we meet in Meeka, even if he is the only one who can leave Meekatharra whenever he pleases.

Meeka is being performed at fortyfivedownstairs until February 14th.