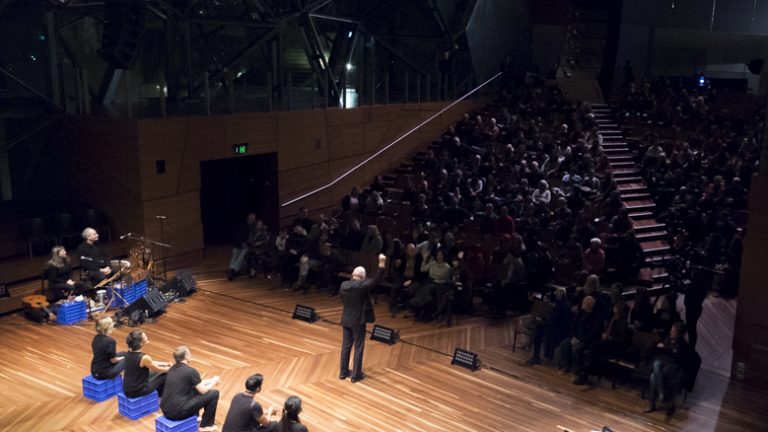 Experience. Strength. Hope. These words don’t carry much meaning by themselves, but together in the context of Melbourne Playback Theatre Company’s latest performance SticksnStones of the Birrarung Marr – Stories of First Nations Place Making, Culture and Legacy, they provided a pivotal focus for the evening’s event.

SticksnStones was the second public event by Melbourne Playback for the year. The event was split into two parts – a Q&A panel with esteemed First Nation Victorians including Jill Gallagher, Reuben Berg, Monica McDonald, Bruce Pascoe, and Stan Yarramunua, followed by a one-of-a-kind improvised theatre performance by Melbourne Playback. The event took place at Deakin Edge Theatre in Federation square, located on the banks of the Birrarung Marr – the river of mists. The Birrarung Marr is a significant meeting place for First Nation Victorians, and so it seemed particularly appropriate for the event to take place beside the river.

The event also coincided with Reconciliation Week – a week where Australia acknowledges the First Nation people and their history of suffering and atrocities since the White Settlement / Invasion 200 years ago, as well as the ongoing negative impact this hidden history continues to have in the present day. It is also a week where Australia takes the opportunity to celebrate and honour First Nation’s Cultural systems.

Each panelist shared stories and family histories of growing up in Victoria and Australia. Jill Gallagher told of the hardships her mother endured. She was born on country in Victoria’s Western District and lived on a mission. “They were very cruel times” Jill’s mother told her, “I try to forget”. At 13 her mother left school and worked as a seasonal picker. Seasonal work meant Jill attended 19 different schools. However, her mother strongly believed education was a catalyst for change and encouraged Jill to get a good education.

Bruce Pascoe, award-winning author of Dark Emu, Black Seeds, told the audience of the efforts he needed to make to discover the truth about his family history. He discovered that his family was aboriginal and had fled from Tasmania. For many years his family was forced to deny their cultural heritage in order for to be able to stay on the mainland. After years of searching and listening to elders, Bruce began to unravel a complex web of family relations. Bruce realized that ultimately, what connected them all, was their connections to the land.

After interval, the vivacious Ian David from Melbourne Playback Theatre Company welcomed the audience to share words and thoughts that had touched or inspired them from the panel discussion. The improvisation ensemble, or Players as they are called, took these words and created physical images of these ideas through dance, movement and music. Three audience members had the opportunity to tell a personal story that the players transformed from the individual to the universal in ways that resonated with all of us in the room.

These performances were incredibly powerful – the players seemed able to draw out the emotional core of each story. The ensemble worked so well together that it was hard to believe that these were not rehearsed pieces of work. ‘Travelling moments” flowed seamlessly together on stage, everyone playing a part when needed. There were moments when their performances brought me, and many others in the audience, to laughter and tears. I can’t recall the last time a work of performance art had achieved that.

There will be other public events by Melbourne Playback Theatre Company later in the year focusing on: Refugees, Climate Change and Mental Health. Do not miss out!