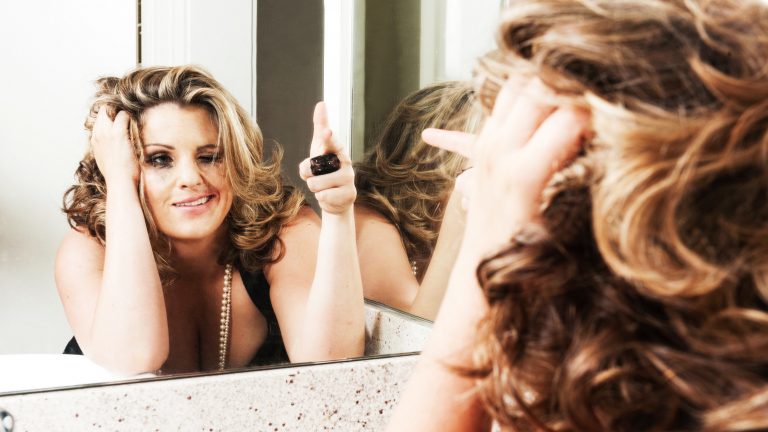 Nikki Britton is an excitable, full of energy Australian comedian whose show, Romanticide, reflects on her not so excitable love life. Britton reflects in her show on her romantic conquests, experiences and failures, and how they have shaped her as a person. The show is a one hour energised stand up routine in a small crowded room at The Forum, which boasts quite a hot time, as it’s stuffy inside. Luckily, there is a massive air conditioner blasting cool air into the place. Unluckily, it was positioned directly behind my head, meaning I sometimes struggled to concentrate on the show as blasts of cold air ruffled my hair.

Apart from this however, Britton manages to encapsulate her audience over the hour by going through her experiences in the field of relationships from the help of a show plan which she attempts to hide behind a massive speaker on stage with her. Although this might come across as amateur at first, it merely adds to the hilarity of the show as she openly denies what it is, instead cracking jokes about how interesting the speaker is. Her use of accents and impersonations brings the majority of laughs in the show, and it’s genuinely amusing when she uses body movement to help tell a story or event.

Britton connects with the majority of the audience through the topic of her show, being romance and relationships. Nearly everyone has experience something to do with love or loss of it, and even if you haven’t you are still able to connect with what Nikki Britton is joking about. She covers the new age of online dating and dick pics, how she deals with them and the stupidity of it. Her audience interaction and comments on what we laughed at added to laughs, pinpointing men’s awkward laughing at the dick pics and just making the show funnier.

Since Nikki Britton’s Romanticide can relate with so many different people, it comes down to her personality which determines if you would like this show or not. Nikki Britton is a very energetic ball of excitement, and perhaps that’s why I enjoyed her so much, because I feel like I relate with the constant energy spikes. If you prefer a little bit more sedated, not in your face comedy, then this might not be the show for you. However if, like me, you enjoy explosive comedians who can never get run off their feet from overuse of yelling, moving or shouting, Nikki Britton is for you. Her show, Romanticide, is on at the MICF until April 23rd at The Forum Theatre’s Ladies’ Lounge.