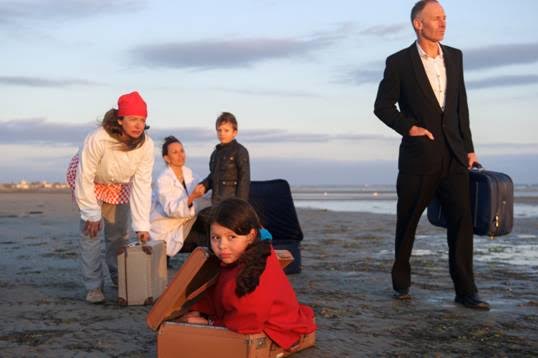 On Thursday the 23rd of June, I went to see Melbourne Playback perform ‘On Ours Shores’ at the Footscray Arts Centre. The troupe are a many things, or rather, become many different things over the course of one night, being one of Melbourne’s leading improvisation theatre companies.

The team consists of actors, organisers and musicians, with the roles interchangeable between the variously skilled artists. As with improv, you can expect that an evening with Melbourne Playback will direct the spotlight from the stage and into the audience at times. However, the theatre group conspires to engage audience participation to a degree I have never before experienced.

You might encounter any selection of their actors on a given night. On Thursday, Ernie Gruner and Karen Berger provided a two piece band. Throughout the show they accompanied the actors with violin, percussion and xylophone. The core cast consisted of Alex Sangster, Allen Laverty, Diana Nguyen, Mike Mc Kevoy, Michelle Hussey and Ananth Gopal, who all conducted themselves with the wit, foresight and perfect timing of improvisation-veterans.

You could expect the duration of the performance to be around two hours.

But it is not time for the actors yet. The evening began with four fifteen minute talks by guest speakers tackling a major issue effecting contemporary Australia, the refugee crisis, and our speakers were refugee and author Mariam Issa, CEO of Asylum Seekers Resource Center Kon Karappanyotiddis, refugee and advocate Mohammed Ali Baqiri, and representative from the Refugee Action Collective and St Albans teacher, Lucy Honin.

They were each eloquent, compelling, brave and shared some painful things while displaying a hope for the future that had survived the incredible test of their pasts. I encourage every listener to go and give them a google – they are an excellent source of highly educated information on the topic of the refugee. In the greater plot of the evening, their function was to grab the absolute attention of the audience and force them, both with kindness and a certain emotional brutality, to engage not only their intellect to the issue at hand, but their senses, memories, emotions – essentially, bringing deeper parts of our humanity to bear on the refugee crisis.

As the final speaker finished their speech, the audience left the theatre for intermission. We staggered around like shell shocked soldiers, surprised at how emotionally exhausted we had become. I had been turning over in my mind refugee or immigrant children I had known in primary school and high school, having grown in the course of an hour closer to understanding the magnitude of their experiences than I had ever had before.

Returning to the theatre, we were met by five actors dressed in black and shoeless, arranged in a single horizontal rank, seated on milk crates, were occupying the space in which the speakers had been. There was nothing else on stage. As the final audience members took their seats, the MC jogged energetically to the crowd and asked for people to call out a word the summarised how they were feeling after hearing the speeches.

After a brief self-conscious pause, he was answered.

‘Tearful’, ‘ashamed’, ‘sad’, ’empowered’ came the calls from the crowd.

The MC bounded up the stairs to a woman. ‘Tell me’ he said into the mic, ‘what makes you feel tearful, and why?’

The woman attempted to explain herself, to explain a feeling that was obviously more complex than a single word. After a minute or so of interview, the MC turned to the actors who were still seated silently on stage and asked them to perform a song based on what the woman had just said.

The lights dimmed. A green spotlight switched on, hitting the middle of the stage. One of the actresses danced into the middle of the spotlight and began to sing, joined gradually by the rest, which compounded into a symphony of voices. The cast had picked up on a few key phrases: ‘open heart’, ‘clear mind’, ‘come here’, which they sung layered over each other, creating a tumult of straining voices or calm voices, differing in cadence and strength. It lasted perhaps three minutes.

I was initially confused and embarrassed by the performance, until I realised that they had hit upon something in the audience members words. It wasn’t just her words they were examining, it was her tone, her confusion, her sadness. They had interpreted this as best they could, and were reflecting it back to her and the rest of us through performance, creating it again outside her and in a way that was different but the same, to understand again in a new way.

Over the course of the evening, the audience was asked for their feelings, stories and thoughts, inspired by the initial speakers or by their own history with the refugee issue. With this deeply personal information, they made us at times giddy with amusement, then angry, then euphoric, then quiet with sadness. Song and music were not the only weapons of expression they deployed, utilising dance, mime, language and light to perform the things which the audience conveyed. Each act was around 3 to 10 minutes long. We left the theatre that night having examined and gained insight into some human parts of ourselves and our fellow audience members that are not so often brought into the public or the conscious eye.

Melbourne Playback’s next show deals with climate change and will be in August this year. Tickets and dates are not yet announced, but head over to melbourneplayback.com.au for more information. 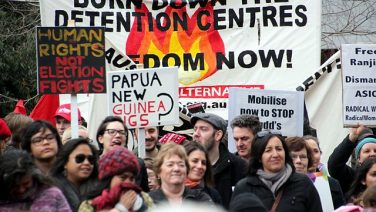