Review: Our Kind of Traitor 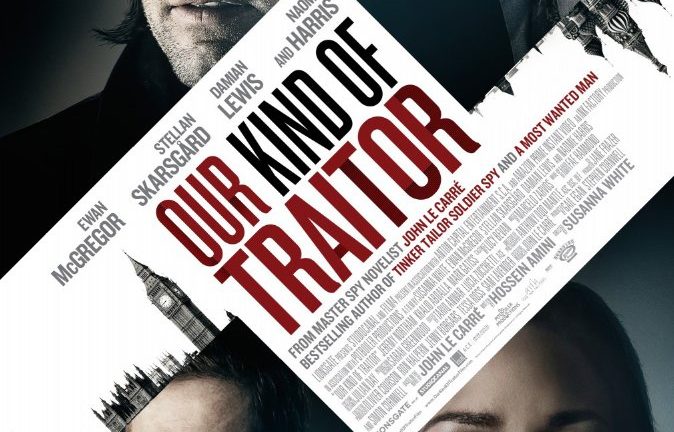 Our Kind of Traitor may well be the least confusing film adaptation of a John le Carré novel that we are ever going to see. If you enjoy political thrillers but don’t exactly the have the head for real, convoluted espionage, Susanna White’s film is sure to be the thing for you. Unlike the rather cold and brittle Tinker Tailor Soldier Spy, this story of a man about to inform on the Russian mafia has a much stronger human element, one that often even takes precedence over the political machinations, which are explored in unusually sparse detail. Dima (the always brilliant Stellan Skarsgard) wants to defect to Britain, using the central intelligence he has been privy to in order to gain safe passage from the British Secret service for himself, but also, more importantly, his family, whose lives have been threatened by the vengeful new mafia boss, “The Prince” (Grigoriy Dobrygin). MI6 won’t officially go anywhere near Dima, but an agent named Hector (a perfectly British Damien Lewis) reaches out to him without official sanction and offers to get him sanctuary, provided the man can give him enough information to bargain with. Dima doesn’t want to give the secret service everything he has, everything they need in order to take down The Prince and the treacherous Aubrey Longrigg (Jeremy Northam), only to be left for dead. Hector won’t be able to put a strong enough case to the service unless Dima gives him everything he has.

To get things past this standstill, Dima reaches out to the holidaying English couple Perry (Ewan McGregor) and Gail (Naomie Harris), who he’s only just met but who have already shown themselves to be trustworthy, principled people. He asks them to be present for all the negotiations, to put their safety on the line to ensure the safety of Dima’s family.

Dima’s wife and children, and the thorny question of who should be responsible for their survival, is ultimately the heart of this story. The family themselves all look to Dima, who is not just the self-proclaimed patriarch but also the instigator of all this, to protect them all, and put him down whenever he looks to be failing to fulfil this duty. Dima, and indeed Hector, look to the secret service to fulfil their duty to those who are giving them information at great personal risk, to be better than the criminal organisations they are working to bring down and the oppressive political regimes that they fight against. On the other hand, the service, embodied here by the character of Billy Matlock (Mark Gatiss) is looking to Dima and Hector to give them enough to go on that will ensure that this operation doesn’t ruin them. Meanwhile, all of these parties are looking to Perry and Gail to offer the independent assistance they so desperately need. At first the couple echoes the words of the service, that they are not the ones who put Dima’s family in this dangerous situation and that it is not their responsiblity to get them out of it, until Hector shows them photos of The Prince’s terrible handiwork and cunningly triggers their empathy. The lowly agent is certainly very well versed in the power of personal motivation. Much of his determination to finally bring down Longrigg is personal vendetta after his last attempt to expose the big shark saw his son imprisoned.

At least in this adaptation, that particular element of backstory feels a little haphazardly thrown in to humanise his character at the last minute. It’s talked about but never really felt. On the other hand, the conflict between Perry and Gail, while very clichéd, is evident visually as well as verbally. White places her two best directed scenes in the first ten minutes of the film. The first is of a grizzly, politically motivated murder by The Prince that perfectly sets up the impetus for the rest of the story, the terrible danger that Dima is fleeing from. The second is a painfully poetic scene of intimacy interrupted by an old wound that Gail is still healing from. It is later revealed that Perry slept with one of his students, and that this trip to Russia was meant to help repair their marriage. There’s no denying that this is an overused plot line, but it works because, as with the cruelty of The Prince, we can see it as well as hear about it, and seeing is believing.

Hector’s grief might not have the space to be shown, but his rage is palpable, both politically and personally. His only scene with the nefarious Longrigg managed to do the most with the least, and his rant to his peers about the world’s complacency in running on black market economies is the flm’s great dialogue centrepiece.

Fans of the more cerebral le Carré adaptations will probably be put off by this one’s more emotional bent, but ultimately it makes for a stronger and more memorable cinematic experience.