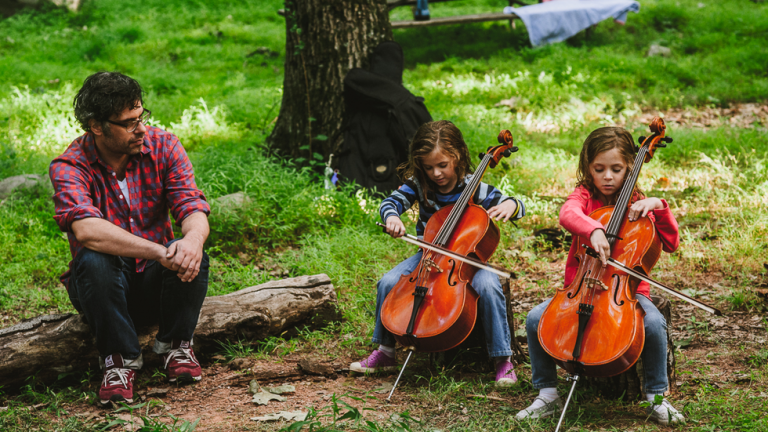 Director Jim Strouse brings to the screen a familiar face in an unfamiliar setting, as we are presented with comedian Jemaine Clement as Will in People Places Things. You may remember Clement from the highly popular TV series Flight of the Conchords, and similarly with this film Clement is a talented and quick-witted Kiwi living in the hype of New York City.

Will is a Professor at the School of Visual Arts and the father of two vivacious young girls, raising them with his beautiful partner Charlie (Stephanie Allynne) in their Brooklyn home. Will seems to have his life pretty much sorted, until he walks in on Charlie and friend Gary (Michael Chernus) doing the deed at their daughter’s fifth birthday party.

We then flash forward a year to a confused and lonely Will, living in a studio apartment in Astoria and feeding his daughters pizza for breakfast. Charlie, who was once against marriage and could not commit to Will, now tells him she is pregnant with Gary’s baby and plans to tie the knot (and from then on we really don’t like Charlie). Will’s days now consist of drawing his comic book, teaching and looking after his adorable twin daughters (Gia and Aundrea Gadsby). It seems as if everyone else is moving forward, and Will is stuck in a sort of numbness unable to recover from his heartbreak. That is until his student, Kat (Jessica Williams), sets Will up with her mum, Diane (Regina Hall), literature professor at Columbia. Their first date is not a great success – despite those of us in the audience rooting for Will – as Kat’s mum is not approving of her daughter’s choice to study with a comic book author at an arts school. But as you can guess, a romance does start to blossom and the plot is underway.

However the plot line does fall a bit flat at times, and those of us who are suckers for a standard ending are left slightly unsatisfied. At times, the scenes don’t feel genuine and you can guess the direction we are heading with some overdone re-enactment of Single Father Difficulties. Unfortunately many of the scenes are guessable (excluding the ending) and we are left wanting to see a bit of originality and incorporation of the incredible city they’re supposedly living in.

That doesn’t mean to say, however, that this movie is not one to try out. Clement’s performance is one of quick humour and oblivion that is not something easily missed – if you liked Flight of the Conchords you’ll enjoy this film as his character is not too dissimilar. His unique comic timing and quick one-liners give standard scenes with meet-cutes and guessable plot lines a pinch of flavour. Australians and Kiwis alike will understand some of the underhanded, perhaps more personal jokes Clement throws in there. That combined with the undeniably New Zealand accent in juxtaposition to the American twang brings viewers more connectedness to the authenticity of the character. Credit must be given to Clement for keeping consistency throughout ,as he leads the show in all but one scene of the 85 minute film.

Another unique touch of this film is the use of drawings as a sort of narration for Will’s feelings. The sketched pictures are a guide to Will and some of the more raw emotion we don’t see from the actor. This is quite important to keep up with as it helps to see some of the motives of Will’s decision making and we feel the repercussions when things aren’t working out well for him.

I suppose that’s what really sums up this film: a journey with Will through some of the tribulations of adulthood as a single parent clumsily finding his way, with the responsibility of children’s lives in his hands. And as serious a matter as that should be, a comedic twist makes for an enjoyable film. But don’t go in expecting anything too jaw dropping, as the movie is more a of a pleasant reminder we are all failing at some aspect of life and we should just laugh it off and give it another crack.