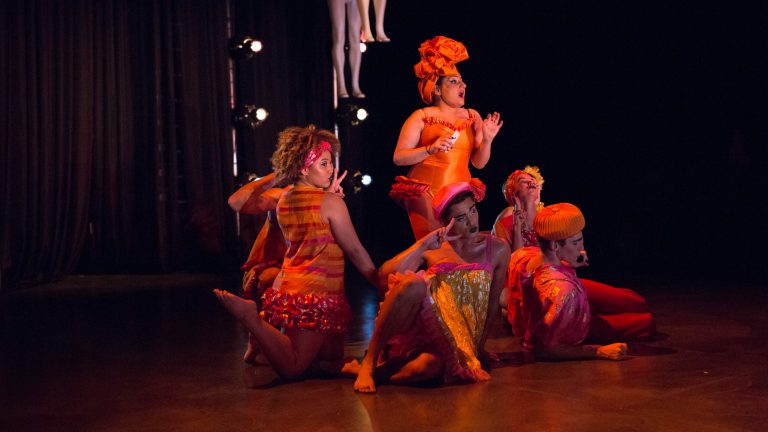 Lyric Opera’s latest production, one of Jean-Philippe Rameau’s PYGMALION, is one of those shows that is sure to attract appraisals like “different,” “interesting” and “really makes you think.” Basically, what you say when you’re not sure exactly what you just saw, but you certainly enjoyed it. This is probably how the premiere audience of this Baroque opera ballet would have reacted to it more than 360 years ago. The story of Pygmalion, a sculptor whose beloved creation is magically brought to life, still feels very familiar today, especially as the stories of Pinocchio, Frankenstein and even My Fair Lady, Pygmalion’s distant literary cousin, are still very much in the public consciousness.

The creation in question in this particular story is brought to life by L’Amour or Cupid, portrayed by Sabrina Surace as generous but also very demanding and just as vain as the human characters. She puts immense pressure on Pygmalion to be as perfect a dancer and physical specimen as any of her pixie underlings combined in order to be worthy of the miracle she has bestowed upon him. As such, she is, of course, the very embodiment of both the perception and the reality of love, in all its selfless yet selfish glory. Her elaborate entrance on the shoulders of her mythical servants, who are covered by her extravagant dress, is also rather Disney-inspired, combining the comedy of Snow White and the Seven Dwarves with the grace of the Blue Fairy from Pinocchio.

In order to literally and figuratively bring this mythological enigma down to earth, director James Cutler has her take out an iPhone and obsessively try to take the perfect selfie with the rest of her group, while in the show’s ballet-oriented set pieces, her impressive ensemble of dancers twerk, crump and sneak in quite a few other contemporary dance moves amongst their more classical repertoire, under the direction of choreographer Georgia Taylor.

As well as that, most of the English surtitles translating the French libretto are accompanied by, and sometimes even replaced by Emojis. For instance, Pygmalion’s frustrated girlfriend, Céphise, portrayed by Kimberly Coleman from the sculptor’s perspective as love’s demonic and tempestuous face, has cows and angry faces projected behind her for most of her scene. On the other hand, her protagonist boyfriend, as portrayed by Patrick MacDevitt, sounds much more solemn and sympathetic in the opera scenes but behaves very comically during the ballet scenes, while his creation, usually a role for a female singer that here is sung most impressively by Josh Tomlinson, is appropriately very much a blank slate, a genderless innocent bursting with love in its purest form. Of course, this is all reflected just as colourfully on the projector screens behind both of them.

Initially these most unexpected contemporary elements were getting some of the biggest laughs of the show, but the more they were used the more they actually came felt perfectly natural.

After all, this show was not written as a piece of refined period escapism, but as an invitation for its audience to take a good hard look at themselves. To achieve this, its Parisian director would have used then-contemporary symbols of narcissism and altruism just as Cutler is now taking symbols from our own society to throw back at us.

Although the idea of updating a classic text is certainly nothing new, and we’ve been seeing it for a while now on both stage and screen, it is certainly still done for a very good reason. Even though this production features an ambitious orchestra playing authentic 18th century instruments, audiences that come expecting a traditional, time-capsuled, proscenium arch opera experience are instead going to see their own flaws starkly reflected in a three-dimensional traverse theatre space in this highly enjoyable production that purposely raises more questions than it answers.