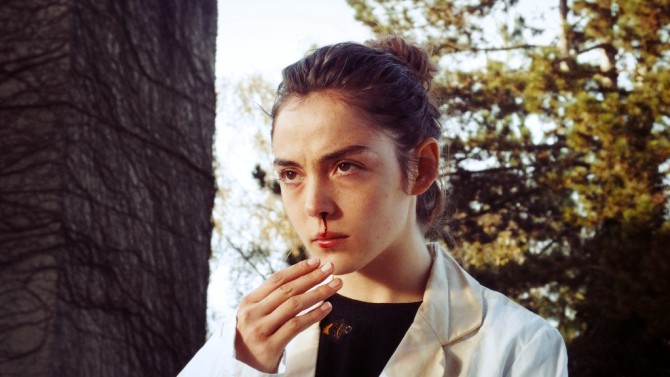 Raw has got to be one of the best horror films I’ve seen in recent years. It manages to create discomfort not only out of the deeply horrifying but also out of pretty much everything else. Cannibalism becomes as nasty to watch as skin rashes. The first film by Julia Ducournau, it’s grisly and very dark and shows an impressive flair for visceral tension and thematic construction. I was gripped from the start and floored by the end.

Justine is a first-year veterinary student, intellectually gifted but socially stunted. It’s the start of the academic year and like all first-years has to undergo a series of unpleasant hazing rituals, including eating a piece of raw rabbit kidney. That she’s a vegetarian who’s just eaten meat turns out to be the least of her worries. Soon after, she starts displaying alarming symptoms, culminating in an intense hankering for more raw meat and, finally, human flesh.

The discomfort is palpable from the start. From the startling opening, to the subsequent scene in the roadside diner where Justine’s family, all vegetarians, find some meat in their meal, to her arrival at the university where she’s immediately thrown into a daunting and unknown environment. No sooner has she settled down than she’s torn out of her bed and forced to crawl alongside other first-years to an unspecified location that turns out to be an underground rave full of sweaty screaming bodies tanked up on drugs and alcohol dancing to oppressively loud music. That’s frightening enough as it is. It’s definitely alienating and unsettling and places us on the side of Justine so we’re with her every step of the way as she attempts to make sense of her situation and survive these intrusive humiliations. And later on, when things get a lot darker, we’re still with her.

Raw does what all good horror films do: it couples themes of horror and of life. And it does this amazingly well. It finds the horror in life and it finds the life in horror. In this case, Justine’s cannibalism is explored alongside the rest of her uncertain identity. She’s trying to figure out her place in society as a young woman, as well as her body. There’s a reason cannibalism is a physical act, as it complements the physical manifestations of conformity and adulthood, like clothes and sex, and the parallel is deliberate and effective. At one point, Justine’s older sister tries to give her a Brazilian wax, which goes wrong, and moments later Justine is nibbling on a human finger. It’s a very clever scene as it shows Justine at her least comfortable, namely changing her body to fit in with social expectations, quickly followed by her most comfortable – being a cannibal. And there’s plenty more like it.

I highly, highly recommend Raw, but I will warn that it’s quite graphic and confronting. Many people have reportedly thrown up while watching it. Many more have walked out. But those people are missing out on one of the best new horror films around.

Raw is out in cinemas April 20.