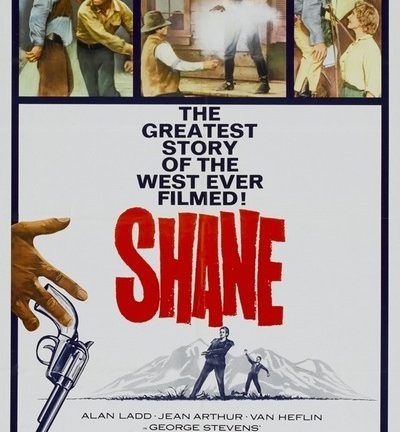 Social injustice is a common problem that can be found all over the world. Whether your parents won’t let you purchase the latest iPhone, or your community is suffering from severe poverty, we are all at some stage confronted by injustice. Shane is the gripping, emotional story of a weary cowboy who takes a stand against an act of injustice. Situated in the Wild West of Wyoming, a brute gang of heartless thugs, lead by a ruthless cattle baron known as Rufus Ryker (Emile Myer) are forcing their domination over the residents of this state, successfully enforcing them into submission and leaving them with no choice but to ﬁnd land elsewhere. This brutal act of injustice persists until one day, a cowboy mounting a horse and carrying a revolver stumbles upon the residence of a local farmer named Joe Starrett, (Van Heﬂin) who, unlike the other residents of this county, is making a stand against the powerful, greedy domination of Rufus Ryker and his gang. The cowboy introduces himself as Shane, (Alan Ladd) and is invited to stay the night with them, while also helping Joe and his family with problems around the house. Thus begins a passionate friendship between Joe, his wife Marian, (Jean Arthur) and his young, riﬂe- wielding son Joey. (Brandon deWilde) Joe begins to tell Shane about Rufus and his gang, and after a few conﬂicts with Rufus’ bandits, Shane decides to stay and ﬁght their mighty power.Before long, Shane begins to ﬁnd himself thrust into a deadly conﬂict between Ryker and Joe that will push him to the boundaries of his physical and mental willpower.

When I ﬁrst received this ﬁlm to review and discovering that it was now ﬁfty- four years old, I thought to myself that this movie would be a bore to watch. Growing up in twenty- ﬁrst century movie technology, the release date of this movie did create a hesitant feeling deep within me, and I was afraid that I would be wasting two long hours of my time. However, when I got into the movie, I felt myself drawn to the interesting plot which I was presented with. George Stevens has created a glorifying movie, ﬁlled with tense moments of deep emotion that will keep the viewer astonished throughout the course of the ﬁlm. Shane has accumulated many awards and nominations for various aspects, and after experiencing the twisted joyride that is this movie, I can honestly say that Shane deserves the acclamations which it has received.

Written By: Alexander Senese-Jones, May 2014