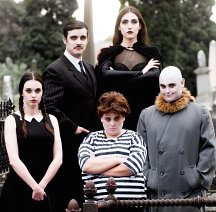 On Thursday I went to see The Addams Family Musical, a performance by Federation University’s 2016 graduating Musical Theatre class. The musical comedy was written by Marshall Brickman and Rick Elice, with music and lyrics by Andrew Lippa and based on Charles Addams’ iconic characters in his comic strip The Addams Family. It was performed at Theatre Works on Acland St in St Kilda and its closing night was on Saturday.

As soon as the orchestra began playing the overture you knew this play would be a crowd pleaser. Rainer Pollard conducted a talented group of musicians, who were both expressive and controlled, and their performance suggested a strong connection between the conductor and musicians. The play then began with the Addams family gathered around the family tree in the graveyard, a yearly ritual to celebrate life and death, and honour their ancestors. The ensemble of ancestors, portraying figures like Marie Antoinette, a WW1 soldier and a suffragette, were summoned out of their graves for the first number; When You’re an Addams. What a spectacular start to the show. The entire cast were charismatic and the blocking of the dancing was inspired and well planned. Adrienne Chisholm’s set and costume design was fantastic, notably the ancestors looked like spooky spectres as they swanned across the stage.

As the family return to the house, Uncle Fester (Liam Dodds) stayed behind and closed off the gates to the underworld, enlisting the help of his ancestors to ensure a dinner scheduled for that night went smoothly. Wednesday Addams, (Tess Walsh) had suddenly fallen in love with a preppy young man from Ohio, Lucas Beineke (Jack Saunders) and invited him around for dinner so their two families could meet. Two worlds were about to collide, and the couple needed all the help they could get for One Normal Night, the name of another musical number which was spellbinding.

Many of the family members struggled to understand Wednesday’s new found feelings, as she began to favour bursting into song over torturing her brother Pugsley (Mackenzie Pinder). Her parents, Gomez and Morticia Addams (Andrew Thomas, Bridget Mylecharane) are gravely concerned by her new attitude but try to set aside their differences for the sake of their daughter’s happiness. However, Pugsley fears he will lose his sister to the light side and plots to break up her relationship during the dinner. The prim parents of Lucas, Mal and Alice Beineke (Shaune Davis, Cathryn McDonald) arrive and are seated for supper. They end the meal with a game called Full Disclosure, where you slip from a chalice and tell the absolute truth. Pugsley pours a potion into the cup, a concoction which is designed to bring out one’s dark side, and it is intended for Wednesday but is instead intercepted by Alice and she transforms into her less inhibited self.

A special mention goes to Patrick Schnur, who played the butler, Lurch, and to Emma Austin who played Grandma Addams. They were delightful to watch for their comedic timing in particular. A highlight of the night was when the Beineke’s had arrived and the family was trying to be as ordinary as possible. Grandma, returning from the cemetery of ancestors, suddenly bursts through the front door, and seeing them exclaims, “Boy, is it normal out there!” Another highlight was the expressions on all performers faces during the scene where Alice asks whether they have a little girls room, and Gomez replies “We used to but we let them all out.” Liam Dodds should be commended for his convincing and expressive performance of Uncle Fester, a character who is in love with the moon. My only criticism would be concerning the Tango De Amor towards the end of the Act Two, which felt a bit underwhelming on the technique side in comparison to the other dance numbers. However, it was an extremely strong performance by all cast and crew. The director, David Wynen, Musical Director, Rainer Pollard and Production Manager, Jim Austin, should be pleased with their show.