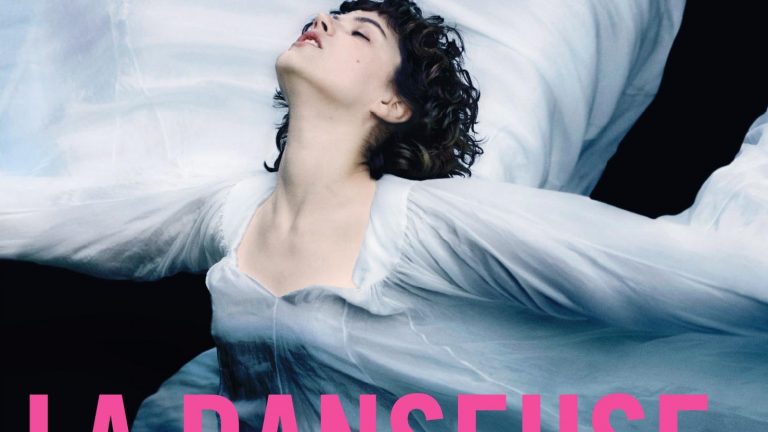 To start with, this film is beautiful. In the locations, in the cinematography, in the dance – the film itself captures and mirrors the longing of the protagonist Loie Fuller for the beauty she is searching for in dance. The film opens in the American Rocky’s where she is living in the wilds with her mad french father who encourages her love of art and her seemingly odd desire to become an actress. There are some charming scenes of a wild maned Soko soliloquising into the air or at taxidermy, perhaps as a set up as the humble roots of greatness but to my view represented a sheer singleness of mind on focused on stardom.

Men are quite appalling throughout the film and it is shot in such a way that Loie is suggested to only find ease and success in the companionship of women. There are some amazing scenes of her and her troupe of dancers frolicking through the grounds of her patron Louis’s house, suggesting true joy and abandon of the type that I imagine Stevie Nicks to have in her well protected female world.

When it comes down to it though, the film is a sports film in genre and construction. There are attempts to hide this under the veneer of beauty it presents the story through but its adherence to sports film tropes give it away. Loie is an american/french underdog, poor and practically orphaned. She gets a selection of coaches – well the support of her infatuated if ether addicted patron Louis and the Folies Bergère manager Marchand and his working partner Gabrielle. Loie is a proud and determined upstart and though she achieves success, it is not without struggling with her own physical and mental limits.

Then enter the antagonist – a young Isadora Duncan, played here by Lily Rose Depp in a charming performance that perfectly vilifies her. Loie falls in love with the young dancer but feeling threatened by her plays games with her. The film does not cast Loie as an overbearing infatuated employer, jealous of her protege, but on quick reflection that does seem to be the case. However, it is really nice to see a film that portrays a female sexuality repulsed by but sometimes accepting of men and alternately infatuated with women – and doesn’t draw that much attention to it or even question it.

The dances themselves – they are breathtaking. Loie’s performances of her famed serpentine dances at the Belle Epoch Cabarets and eventually the Paris Opera are paired with Beethoven in the film which, while evoking associations with Chef’s Table (and her outfit does look like a beautiful billowing table cloth which doesn’t help), gives real power to the performances that highlight the intensity of them for Loie and the audience. Soko gives a spellbinding performance and with such intensity one cannot take their eyes off of her.

This film as a biopic is startlingly inaccurate and perhaps bares only the faintest right to the claim that it is “based on a true story.” However as a film, it is about a dancer’s search for beauty in the perfection of their vision, and this is does quite well.