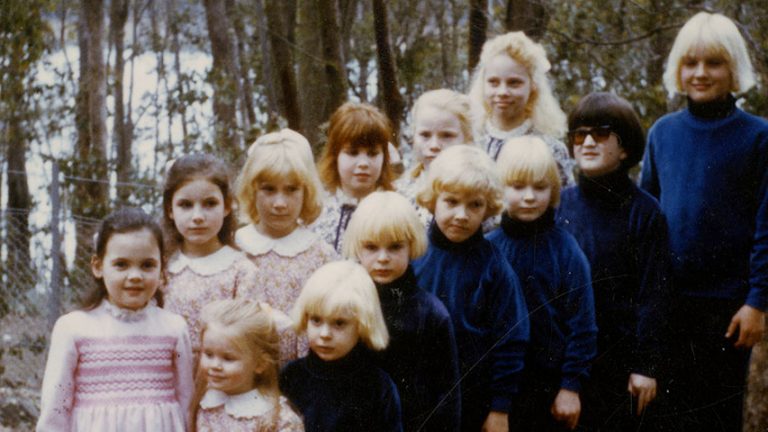 The Family is Rosie Jones and Anna Grieve’s ominously titled documentary about a bizarre Australian cult that was finally discovered by police in the late 1980s. Consisting mostly of corrupt doctors and forcibly adopted children, its leader, Anne Hamilton-Byrne, proclaimed herself to be the female reincarnation of Jesus Christ. She had prophesised a coming apocalypse and was desperately trying to build a master race of bleach-blonde stolen children that could survive it. Anne’s sect had the numbers, the resources and the influence to secretly spirit away 28 children from teenage pregnancies to her remote property in Eilden, Victoria.

Anne could tell any member of “The Family” who to marry, who to divorce, where to work, where to live, and when to drop everything and relocate to avoid detection. She told them they would be punished for eternity if they dared disobey her. Her “children” never questioned this, since being starved, beaten and bullied with the promise of eternal life was all they had ever known. Many adult and even teenage members of the sect were drugged with LSD in a psychiatric hospital in Kew until they too believed that Anne was the Messiah. One of the few people who dared to defy her was told that when he went home that night he would die of a heart attack, and, unsurprisingly, he was so terrified that he did exactly that.

Jones’ direction paints Anne as a demonic figure shrouded in myth and mystery, largely because this is what she was to Detective Lex de Man, the officer who spent the better part of his life tracking her down and trying his hardest to get her convicted. He would have had to sift through mountains of distraught testimonies, filled with wild stories and exaggerated claims, to get to any defensible truth about who she was and what she was doing to these people. Jones’ film contains countless pieces of wordless home footage showing her smug, pretentious smile, something the detective would have also seen repeatedly as he was working to take her down.

I’m not sure what I find harder to believe, that she was never brought to justice or that she is still alive now, even as this film is being released: a 93-year-old living with dementia in a Melbournian nursing home. Naturally, the suburb it’s in is never mentioned, most likely for her own safety. Jones and Grieve’s interviews with the surviving members of the sect answer most of the many questions that immediately spring up, and I’m sure those that the film doesn’t get to are addressed in the book Jones co-wrote with Chris Johnston. The residents of Eilden did hear screams and cries for help coming from the property, and eventually someone did call the police. They came in to question the children, but with Anne present the entire time. They asked the children if they were being fed properly, to which they replied “‘yes” simply because they were still alive and didn’t know any better. The Family was even visited by the Department of Education, during which time Anne and her husband, Bill, had dressed everything up to look like a legitimate school, with desks, chairs, and a blackboard full of impressive looking equations, which was all enough to fool them apparently.

For years, none of the current or even past members of The Family were willing to speak out against Anne. Some were convinced that she really did love them, and that she deserved their love in return, but most of them were afraid of what she could do to them, spiritually or physically. This twisted obsession is something that Jones conveys very strongly, perhaps even too strongly, throughout the film’s 98-minute duration. The home footage of Anne, simulations of LSD hallucinations and aerial shots of the forest surrounding the property are all underscored with psychedelic compositions by Amanda Brown. While sometimes they feel justified, they aren’t always needed. By all accounts, Anne Hamilton-Byrne, a woman of humble origins, loved to be the centre of attention, and by building her up in this way as someone larger than life, the film might ironically be giving her what she wanted, even as it is exposing her for what she truly was.

However, there are still scenes here that recognise the most disturbing part of this story. What’s even more chilling than the things Anne was able to do is the fact that she was able to do them, the fact that Australia’s legal system, education system and medical system all allowed this cult to thrive for as long as it did.

The Family is at its best when it’s not spending too much of its precious running time on Anne and remembers what’s more important to show here: the life-long trauma of the victims and the broken systems that let them all down.