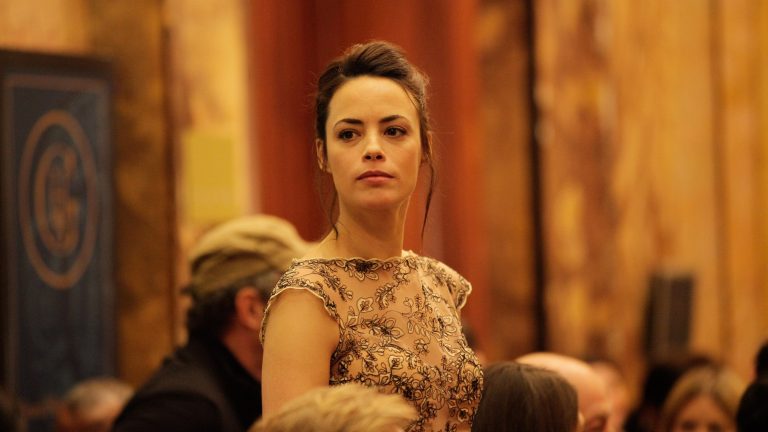 Any film that opens with a naked man inexplicably wandering around a very public place is promising a lot. Whatever story has placed him in this bizarre position, it’s sure to be a good one. It turns out that disrupting the order of a posh hotel in this manner is an ingenious ruse to steal a diamond. It is a very memorable introduction to our man, Simon (Yvan Atta), a skilled diamond thief who later sets his sights on the “last diamond” of the film’s title. It is also an irresistible teaser to the thrilling hijinks that are sure to come. This opening scene is probably the cruellest thing director/writer Eric Barbier could have thrown in there. There are some memorable hijinks, but they are few and far between.  To be thrilling, they have to rely very heavily on gimmicks. They get no support from Simon or any of the other characters that participate.

Simon is basically a male femme fatale (an homme fatale, if you will). To get to that irresistible diamond he has to go through young, ambitious diamond specialist Julia (Bérénice Bejo). Her mother has spent the better part of her life guarding the Florentine diamond, which she is finally ready to auction off. After her sudden, tragic death, Julia inherits the responsibility of looking after its sale. As determined as she is to do this the right way, she is clearly inexperienced and only just managing to fake it ‘til she makes it. She is easy prey for Simon, who starts seducing her to get information about the Florentine’s heavy security.

Of course, Barbier very quickly asks to see their shallow fling as a deep romantic connection – to become emotionally invested in their relationship and hope that the theft won’t jeopardise it. Initially it might appear that Simon is acting in self-interest, but later on, as we get to know him, we discover he’s actually motivated by self-interest – sadly, that wasn’t a typo. He does manipulate her, humiliate her, break her heart, make her face imprisonment, and destroy both her career and her mother’s legacy for a score. However, when he is given the option of causing her physical harm, or causing someone else physical harm, he chooses to spare her. Oh, and he doesn’t kill people. We meet some other diamond thieves who do kill people, but he’s not one of them. Not being a murderer isn’t a redeeming quality: it’s the absence of a fault. It’s certainly not a reason to love someone.

There is nothing wrong with making a film about immoral people, but you have to have fun with it. There’s nothing wrong with telling a very familiar story, but you have to tell it well, and with enough gusto to make you momentarily forget you’ve heard it many times before. You need to accept what a ridiculous farce you’re putting on screen, and own it unashamedly and unreservedly. Barbier makes the mistake of assuming that Simon is someone we’ll all naturally gravitate towards. I certainly didn’t. His actions only entertained me when they were unaccompanied by an unusual setup – such as being naked in a hotel corridor – or an interesting twist – such as the one employed halfway through that briefly rejuvenates the picture. Sadly, the twist also takes away what drew me towards Julia. After being a very fine moral centre and strong-willed hero of the piece, and even better stunned victim, she is given very little to work with in the concluding parts of the film. If she were the femme fatale I would expect this – I would still be disappointed, but not surprised.  The rule has always been that the femme fatale gets to be in the driver’s seat of the early plot developments, but in the later proceedings she must retreat into the background and let the male hero have his moment. Our homme fatale is certainly pulling all the strings in the first half, but in the second half he continues to have the spotlight, throwing the film off balance and unfairly short-changing the lead female even more than she’s used to.

Watching The Last Diamond is like seeing someone do a traditional dance with all the right steps but none of the right feeling. Barbier hits all the right marks. He certainly starts and finishes in the correct positions, but the journey there in no way merits applause. However, he does try a few new moves that just manage to keep you awake and focused on what he’s doing.

The Last Diamond is screening as part of the Alliance Française French Film Festival in Melbourne March 4-22.