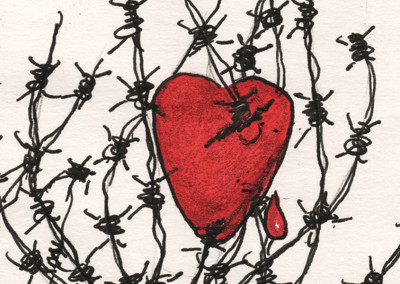 Written and directed by: Ian Robinson.

The Process tells the terrible tale of what it means to be an asylum seeker in Australia. Labelled an illegal-non-citizen, refugee Raj (Ezekiel Day) is all alone in navigating the tantalisingly complicated and infuriating process of applying to be a citizen. It illustrates the frustration and downward spiral when individuals who risk their lives to start again, start anew in a place where they are meant to be safe from harm. For Raj however the process, and life in detention proves to be altogether as treacherous as his past life he fought to leave behind.

Opposite Raj we are offered the distinctly separate (yet aligned) narrative of the Minister of Immigration (Sean Scully) – known in the production as the minister of comings and goings. Unlike what one would expect from a politician, the ministers in The Process offer us the straightforward answers at press conferences instead of the circular banter fed to the media from the mouths of politicians. Making a mockery of the policies in place we are clearly told by the minister that according to him and his expert panel of expert panellists, these “boatpeople” do not deserve to be treated as humans. The minister offers us lines devoid of empathy that illustrate the powerplay driving these actions that benefit few. He acts, just as a politician would, without emotion and without care for those underneath him. Although the questions posed by the journalist team are at times a little too direct, his dialogue is on point and well delivered.

The arts are about expression, not happy endings, and not ideal worlds. Written and directed by Ian Robinson, The Process offers us a poignant and thoughtful look into a side of our world that most dismiss, but one that needs to be talked about if it’s ever going to change. This small ensemble of three deliver a solid performance that will leave you banging your head against the wall of bureaucracy: wondering when, if ever the higher ups will offer compassion and empathy to those who deserve it.