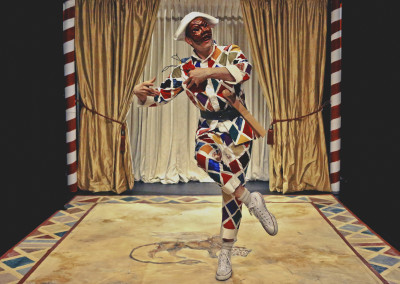 Theatre company ‘Make a Scene’ alongside the La Mama Learning Company are currently presenting their interpretation of Carlo Goldoni’s masterpiece ‘The Servant of Two Master’s. It is showing at Australia La mama theatre in Carlton until July 31st.

The cast includes Christian Bagin, Sharon Davis, Roby Favretto, Irene del Pilar, Freya Pragt, Lelda Kapsis and Darcy Kent. Many actors play both a primary and a secondary or extra character, and the lightning quick costume changes became just as fun as the play itself, as I tried to keep track of everybody, the frequent use of masks as props making this an even greater and more interesting challenge.

Goldoni’s 18th century play has been translated and directed by Rosa Campagnaro, who has studied in depth the nuances of commedia dell’arte, or the Italian tradition of comedic improvisation. While ‘The Servant of Two Masters’ is not necessarily part of commedia dell’arte canon, given that it is scripted in depth, in her version Rosa has encouraged her actors into acts of improvisation which in my opinion gel wonderfully with the feeling of the play and add exponentially to the wild silliness of the whole affair.

For example, the night I attended (the 17th of June), Brighella the innkeeper began to recite a menu to the audience, but got his mains mixed up with his entree. Truffaldino the servant, who was sharing the stage, leapt in using his outrageously coy Italian accent, ‘come on man, you’re a professional. You can’t even get this right? Let’s start the scene again’. After a quick argument in character, Brighella walked off stage left and reappeared, completely composed, and the scene continued, this time getting the dishes in the correct order.

I can’t stress the fact that everyone is in their own roles perform excellently, and throughout the play every character made me laugh out loud with wordplay, physical slapstick comedy, hugely exaggerated ego’s, excellently crafted accents and the obvious chemistry the exhibit in their on stage relationships with each other.

For me, the pinnacle of the comedy in the play was Campagnaro’s plotting and the actors execution of the famous dining scene, in which Truffaldino is simultaneously serving his two masters unbeknownst to the masters themselves. The direction was ambitiously high, demanding perfect timing, high energy and on the momentum of the scene. That is, if one performer drops the ball, the whole thing loses all its power, but, the quicker, louder and riskier the scene is, the more hilarious it can be. It was perfectly  executed. The audience did not stop laughing for the full five minutes of the scene.

While every performer in this play did a brilliant job, the star of the show was Christian Bagen as Trufaldino , the eccentric, rude, hilarious and endearing Servant. Bagen presented his character as he is meant to be, and stole the spotlight with perfect  comedic timing, improvisation, maturity and charm.

It is a light hearted, entertaining play as a whole. However Campagnaro has  emphasised themes of sexuality and feminism in her version of the play, themes that are partially addressed in the original given a large part of the plot being devoted to a woman, dressed as a man, searching for her lost lover incognito, and the gender-based power she comes to control in her camouflage

The themes have been drawn out gradually over the course of the play, and they include women’s sexual libertarianism, the ridiculousness of gender stereotypes, and the sad cruelty of these stereotypes being enforced. Furthermore, the fact that so many of the antiquated social codes designed to oppress women are present in Goldoni’s 18th Century play live on in our modern society is another well deserved and well calculated jab.

So, Campagnaro’s ‘The Servant of Two Masters’ champions the women and condemns the fact that their qualities and capabilities, their power, is negated by a social code that when broken by the women in the play, seems bizarre that it had ever existed. And yet, none of these characters are white-washed. Both the men and women of the play have very real, repulsive human flaws, which somehow makes them that much more sympathetic.

And indeed, this play opens a discourse on feminism that is based largely in laughter – in the ridiculous, the silly, which can so often help us examine and access serious matters with an open mind.

Once again, The Servant of Two Masters is running until the 31st of July, so not much time left. Head to lamama.com.au for more info and booking details. 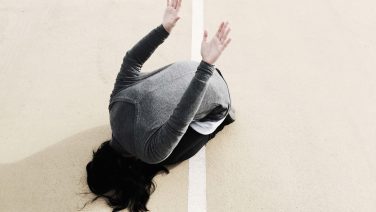 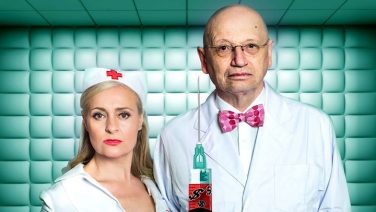 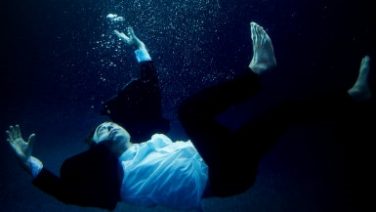