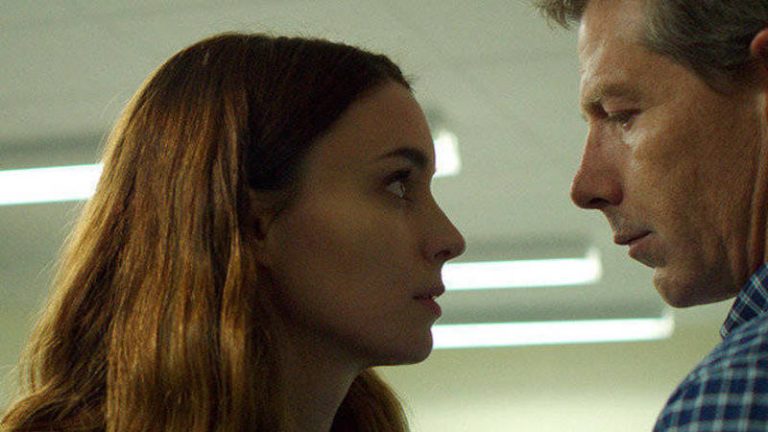 Before I hop into this review, I need to note that this talks about issues to do with paedophilia and child molestation. If you are sensitive to these topics, you’re welcome to call up lifeline on 13 11 14 if you’d like to talk to someone, or you can check out some of my other reviews instead.

UNA follows the story of a young woman tracking down her childhood molester and confronting him about his actions. This film doesn’t hold back and does justice to the topic without being insensitive. The character of Una is straddled by two actors, Young Una played by Ruby Stokes, and the older version played by Rooney Mara. Stokes portrays the trustfulness of a child accurately, and Mara maintains that thread through adulthood. She wants to trust Ray’s words, despite his actions, and this is a reoccurring theme throughout the film.

Ben Mendelsohn plays Ray, a paedophile who has none of the exaggerated traits we come to expect with these characters. No moustache or greasy parted hair, no creepy social behaviour, and is in fact quite ordinary. The fact there are no visual tells makes this predator not only convincing, but trustworthy. Even as Ray admits his actions, you still believe him when he protests he’s “not one of them”. Ray argues that there wasn’t anyone else, it was only Una, and framing their relationship as a special bond becomes more unsettling when she seeking out his affection. Her inability to value herself beyond Ray’s standards makes her words hit hard, when she questions whether she’s “too old” to be loved.

The film doesn’t change backgrounds much, and it’s clear it was originally intended for stage. David Harrower’s screen adaptation remains largely in Ray’s workplace, with flashbacks littered in between Ray and Una’s dialogue. But unlike “bottle episodes” you see in television, which aim to save money by confining actors to one location, UNA tries to focus on the actor’s words and a plain backdrop works wonderfully in its favour.

A noteworthy scene is between Una and Ray in the lunchroom, where the lights have been shut off and no one is around. They throw around leftover takeaways and food wrappers, only to lie in the rubbish afterwards. It beautifully captures the feelings of the characters, two broken people trapped in their own mess, a mess they share.

This film avoids the path of twist reveals, and is able to be thoughtful with its content, whilst being thought-provoking for its audience. 3 ¾ stars.