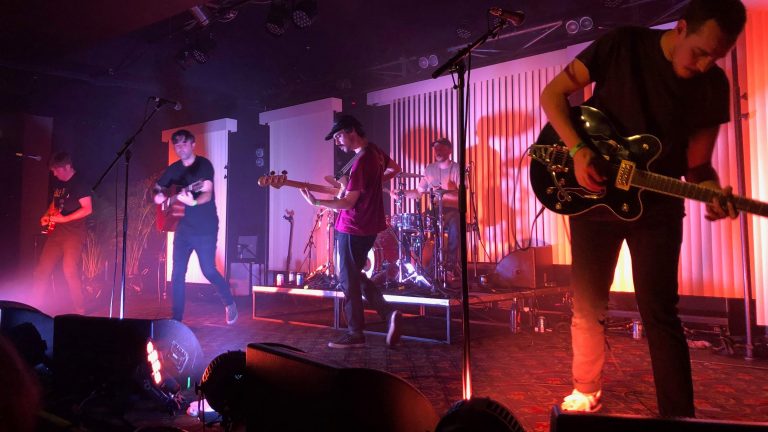 Rolling Blackouts Coastal Fever took to The Croxton to play their hometown show and ‘rock the croc’ on Saturday the 4th of May.

Gregor was a mellow accompaniment to punter’s entry into the venue with their smooth and soothing synths. Suss Mates were next to prime the crowd for the main event. The 3-piece outfit smashed right into their discography of short, sweet and strong tracks. The crowd continued to grow as the set progressed and audience members increasingly got more involved in the set; bobbing, nodding and headbanging whilst the band themselves looked like they were having an absolute ball on stage. A somewhat light-hearted set concluded with the band signing off with ‘we’ve been Suss Mates and maybe you are too’ – on-brand and fitting with the tone of their music.

It wasn’t long before Rolling Blackouts Coastal Fever took to the stage to perform their hometown show. The band kicked off their set with tracks from their 2017 EP The French Press. ‘Julie’s Place’ opened the night and was the soundtrack to the reveal of their new set design- 5 panels of vertical blinds, lined up behind each member of the band.

The band then delved into their 2018 debut album, Hope Downs. Moving from album closer ‘The Hammer’ through to ‘Sisters Jeans’, they then dipped into their latest release, ‘Read My Mind’.  ‘I Want You’ whipped the audience back into the earlier days of the band’s discography and was also the soundtrack to guitarist and singer, Joe, whipping himself in the face with his guitar. As a result, he suffered a blood nose which haunted him through their next track, ’An Air Conditioned Man’.

The band continued to weave their new material throughout their setlist, setting it seamlessly in-between older tracks. Their first release for the year, ‘In The Capital’, further showcased the band’s sonic progression. Rolling Blackouts Coastal Fever has always had a strong identity, both in terms of their sound and lyrics. The 5-piece’s ability to balance 3 vocalists whilst jingling through acoustic chords and tight melodies to create their recognisable Australian surf rock has only become stronger with time. Whilst this new material is unmistakably theirs, there is a sense of softness that graces each of the new tracks, making them the perfect accompaniment to Melbourne’s drizzly autumnal weather or a quick escape to the Great Ocean Road.

A highlight during the track was bassist Tom’s toe-tapping which was so incredible that I couldn’t look away- he was able to both tap sideways and diagonally at the same time. After an audience karaoke moment in ‘Talking Straight’, Rolling Blackouts Costal Fever debuted a brand new track, ‘Big Fence’, which might just be one of my favourite songs yet.

Something that really stands out is the band’s onstage chemistry. Even though RBCF is a family affair (cousins Joe and Fran, brothers Tom and Joe), band members are constantly moving around and interacting with each other; toe-tapping, bobbing in unison and having an absolute ball. It’s evident that they find their performance as special as the audience does.

The main set was topped off by the iconic ‘French Press’, which summoned a few too many crowd surfers (who obviously caught some sort of surfing/coastal fever)

After a very brief pause, the band returned to the stage to perform a cover of Enya’s ‘Orinoco Flow’. I initially thought they were having a little joke with punters, but when they broke into the chorus, it was evident that a) this was no joke and b) it somehow crazily made sense. The sea themes in combination with RBCF’s ability to get the audience going resulted in the cover being well received.

The band’s celebrated track ‘Mainland’ closed the night whilst simultaneously opening a mild but slightly scary death pit in the mosh, making it a little easier for the crowd to dissipate at the end of the gig.

A hometown gig is always an enjoyable thing to be a part of, but Rolling Blackouts Coastal Fever’s impeccable set and performance made it even more special. Do yourself a favour and surf through the back catalogue of this essential Victorian band. Fin.