Rumours of Grand Rapids’ death have been greatly exaggerated

I’LL START by being completely honest: I have no idea where Grand Rapids is. I know it’s in America, but I couldn’t tell you the state without Googling it. If I had to guess, I’d guess Missouri, but I might be getting it confused with some other town.

[I just Googled it. It’s in Michigan. Forward your complaints to A Current Affair.]

And up until about twenty minutes ago, I didn’t particularly care. And then I stumbled across one of the most incredible YouTube videos I’ve ever seen. Yes, it goes for about nine minutes, but it’s totally worth it.

You see, Grand Rapids was labelled “a dying city” by Newsweek (who since have said “it wasn’t us, it was mainstreet.com”, which is like me saying “don’t blame me for the offensive music coming from my iPod, it’s Kanye West’s ‘Monster’, it was all him!”), and the people of Grand Rapids were not happy at all at this label. So, like all alive cities… they set out to prove them wrong. And this is the result – The Grand Rapids LipDub:

My top fifteen favourite things about this video, in no particular order:

1. At 1:32, you see the camera pan across to the emergency services having their own little procession down the road, and you know this whole thing is about to be very special indeed.

4. The danger of the shot about three minutes in with the whole crowd dancing… yeah, you know they’re filming from the back of a car, right?

5. The joggers turn around and jog back. Watch carefully.

6. The gorgeous girl, who looks about four years old, at 4:04, playing a miniature pink guitar that matches her outfit. Say it with me: nawwwwwwwwwww!

7. NEWS CREWS! They DO have a sense of humour!

10. The guy in a dark grey top, nearest to the camera sitting in the Rebecca Black Memorial Back Seat at 6:02, who doesn’t appear to be sure what Jack Flash did to a candlestick… but makes up for it with GESTICULATION.

11. The Nerf Shotgun. Good on ya, Zomb Nerf Fighters.

12. You realise with the shot of the bridge, the emergency services probably needed to be involved anyway.

13. The chalk drawings will get no recognition from anyone, but they should. There’s so much of it! You just know hours has been poured into this thing that so few people will take notice of. Nice work, Grand Rapids chalk artists!

14. It’s not really until about eight minutes in that I realised the whole thing was done in one take. Seriously, I can’t get through a thirty-second monologue without stuffing up. The planning that’s gone into this is insane.

15. In the background of the shot of the George Negus lookalike who points to the camera and says “Sing all the words if you know ’em” 40s in: it’s Where’s Wally!

So, congrats to the people of Grand Rapids, for producing a video with more life than anything the cast of Glee could throw at it.

To quote Liz Lemon: I want to go to there. 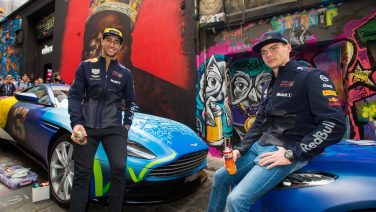