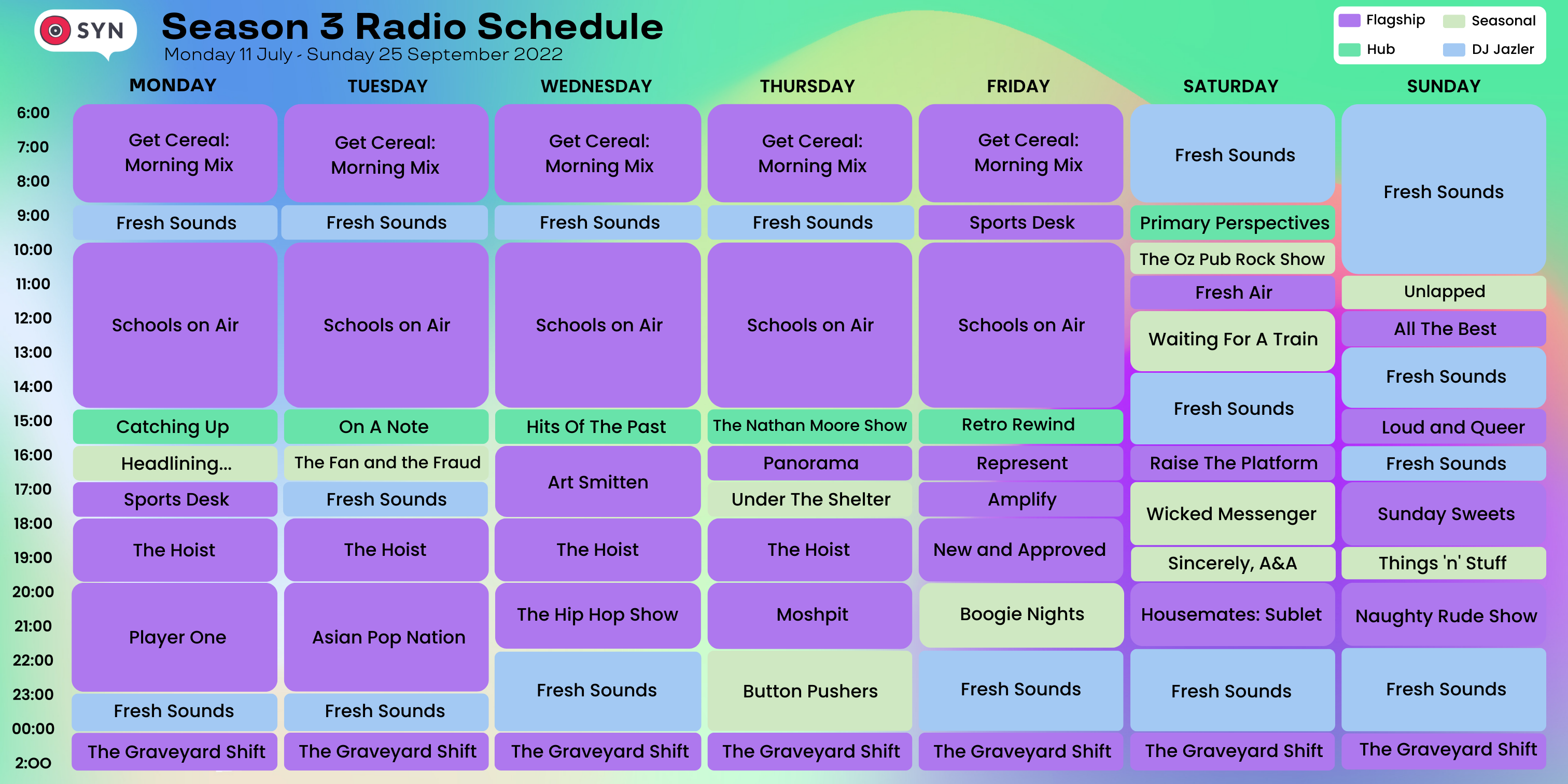 Tune into the next 11 weeks of SYN’s dynamic and diverse radio programming.

Stick to your favourite flagships, welcome back some returning voices, and discover the new seasonal programs joining us on the grid!

Boogie Nights Fridays 8-10pm
For all the toe-tappers, hip-shakers, and jive-talkers. Join Dom as he takes you on a nostalgic journey spinning all of the disco, funk, and soul classics you know and love.

Button Pushers Thursdays 10pm-12am
Who’s gonna push whose button first? Henry and Eddie, two friends, will be challenging each other to the niche and not quite rights of the world as they attempt to push each other’s buttons.

Headlining… With Nick Conte Mondays 4-5pm
Joined by a headlining special guest each week, Nick will be introducing and recommending up and coming talents in the arts. Together they will discuss the talented traits of their new found fascinations.

Sincerely, A&A Saturdays 7-8pm
Take a letter, listeners. Sit down with Anaya and Avani as they nosedive into the nostalgia of reading letters written to and by their past selves.

Take Two Sundays 1-2pm
A pop culture special! Two friends who are obsessed with pop culture express their opinions that no one asked for. Join Hannah and Nick as they look at the best and worst of internet trends, arts, and events.

The Fan and The Fraud Tuesday 4-5pm
Two cinephiles as each week they view and discuss a film that one host is a lifelong fan of and the other is only seeing for the first time. Interspersed with discussions about cinema and pop culture as a whole, Nick and Max will journey through the deep dark echelons of film and uncover why they’ve been a fan and a fraud all this time.

The Oz Pub Rock Show Saturdays 10-11am
Nothing but pub rock anthems! Rock out with Lachie as he revisits the Australian pub scene throughout the 70s-90s.

Under the Shelter Thursdays 5-6pm
This show is all about exposing Naarm/Melbourne’s undiscovered RNB and hip hop talent. Tune in to David each week as he recommends the next up and comers.

Unlapped Sundays 11am-12pm
Pull up a passenger seat and buckle in for an hour of F1 discussion and dissection with SYN’s resident rev-heads, Becs and Indi.

Wicked Messenger Saturdays 5-7pm
A time for tales, stories, and musical fables. Join Lincoln and Imogen as they share the wonderous technique of story-telling across multiple genres, styles, and years of music and poetry.