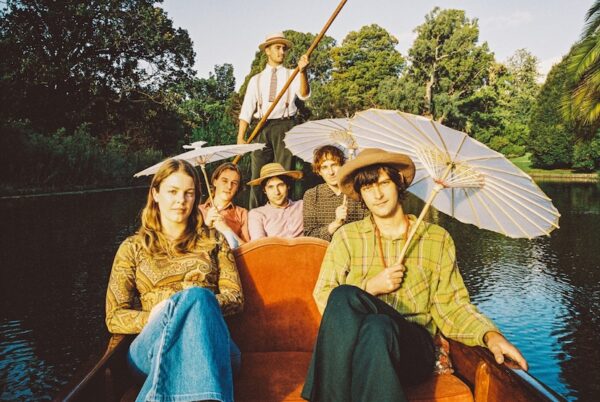 On first impression, Bananagun’s new track ‘People Talk Too Much’ looks like an attack on all of us working in radio and media. But we’ll forgive them, as once again they’ve come with a groovy, sunny piece of psychedelic rock. Drenched in 60s nostalgia and carefree joyous latin and afrobeat influence.

‘People Talk Too Much’ is more expansive than any of the bands previous singles running for almost 7 minutes. Growing in unexpected directions, the track feels improvised with jam band qualities, though the groove’s satisfying destinations demonstrate a clearly calculated journey. The extended runtime allows the band to throw even more components into the mix than previous singles, with progressive and krautrock influences establishing Bananagun as one of the most interesting and forward thinking acts in the Melbourne scene.

‘People Talk Too Much’, along with much of Bananagun’s work, has a bohemian psychedelic quality reminiscent of fellow Aussie’s The Babe Rainbow. Establishing their own individual sound by introducing a unique South American flare. Incorporating sounds of the MPB and Tropicalia movements of Brazil, evoking the spirit of iconic acts like Os Mutantes or Lô Borges. Creating an undeniable groove and instant good time that can transport you out of lockdown to a beach party in Rio or Byron Bay, with a cocktail in hand.

Up until this point, the band have consistently used minimal vocals, and aligned with the songs title, this track continues this method. With the exception of a lyrical interjection of “Money talks to people, people talk too much”. A simple but effective philosophical mantra that neatly ties into their summer of love aesthetic.

The vision shown in this track and the eclecticism of all of their output is very exciting, and how it all fits together into a cohesive project we will find out very soon with their debut album ‘The True Story of Bananagun’ dropping on June 26th.