Sunday Sweets: Floodlights – From a View 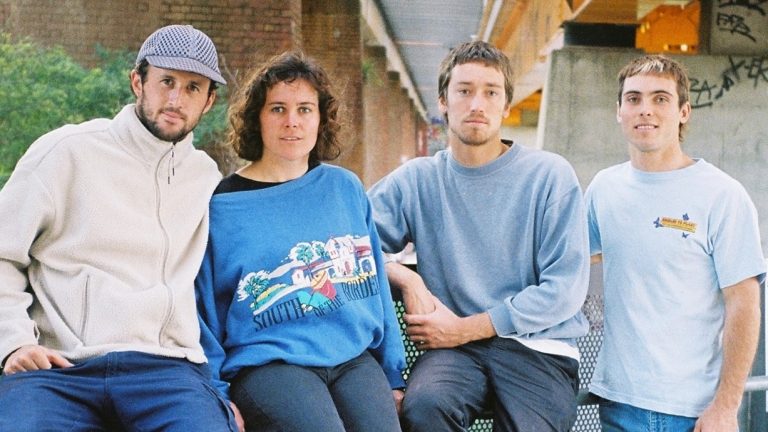 On ‘From a View’, Melbourne’s Floodlights present a bittersweet portrayal of disillusionment and the glimmers of hope found within the company of others, honouring the bands name by providing a little light in the dark.

Floodlight’s style of indie garage rock infuses elements of jangle pop and power pop reminiscent of deeply missed band Royal Headache. Lead singer Louis Parsons delivers his vocals with a similar level of devotion, genuine passion and distinctly Aussie spirit. All throughout the album the band’s sound is sincere and relatable with their hearts well and truly on the record’s sleeves.

‘From a View’ opens with a dejected sounding harmonica on ‘Waters Edge’. Which turns up frequently throughout the record, establishing a dusty rural atmosphere. Slowly the drums and guitars kick in. Creating an image of someone down on their luck to the point of giving up, before rising in hope, getting up, and out, and on with it. A perfect way to begin a record so aware of life’s many issues but with a focus on finding hope and positivity.

Lead single ‘Matter of Time’ arrives next. The first example of how effortlessly catchy the band’s tracks can be. Held together by a somewhat Pogues influenced pub rock chanted chorus.

The lively delivery of the hook and the tracks’ introspective and pessimistic themes clash intriguingly. Sounding like a pack of drunk footie fans that instead of celebrating whilst leaving the MCG were on the way home from a Bukowksi poetry reading.

The anthemic and hardened nature of the bands music present them as the spiritual soundtrack of the small town pub, which incidentally is the name of a fantastic track on their previous EP ‘Backyard’.

Whilst ‘Matter of Time’ has an upbeat groove, lyrically it focuses on inevitable failures. All over the album you’ll find hints of optimism stained by hardship and disillusionment. ‘Glory of Control’, ‘Matter of Time’, ‘It Was All Going So Well’, all hold this feeling of positivity crumbling upon the realisation of how unfair and tough life can be. These thoughts are powerfully projected through a raw Aussie pub rock, garage birthed sound immersed in the bleak gothic tones of Nick Cave and The Church. Conveyed strongly through Parsons’ delivery fluctuating between a tired drawl and raucous yelps.

On ‘From a View’, Floodlights play with the natural chemistry of a seasoned live band. With lively high energy performances across the board and some fantastic solos. Whether it be an urgent guitar on ‘Walk Away’ or beautiful harmonica on ‘Thanks for Understanding’.

Lyrically the moments of positivity are found in the combination of Parsons and guitarist/backing vocalist Ashlee Kehoe’s voices, shown best on ‘Thanks for Understanding’. Whilst he sings with such pain and frustration, the two seem to be calming each other down and offering a comforting solidarity. Focusing on a lack of opportunity, the difficulty in following passion, government and bourgeois oppression and a depressing amount of other pressing issues. But the balance found alongside Kehoe’s warmer voice and their conversational lyricism instantly creates a more hopeful atmosphere.

Whilst the album runs on a disappointed and hurt energy, ‘Happiness’ raises the urgency. Unwilling to succumb to complaining until quietly disappearing, Parsons yells “Happiness doesn’t wait for me”. A reminder to himself and to us, to go out and make your own future happen. Don’t allow for the depressing state of the world or a seeming lack of control stop you from at least trying to be who you want to be and doing what you want to do. Waking up to Australia’s $86 billion budget deficit announcement, its messages like this and calls to rally behind each other that we really need, now more than ever.