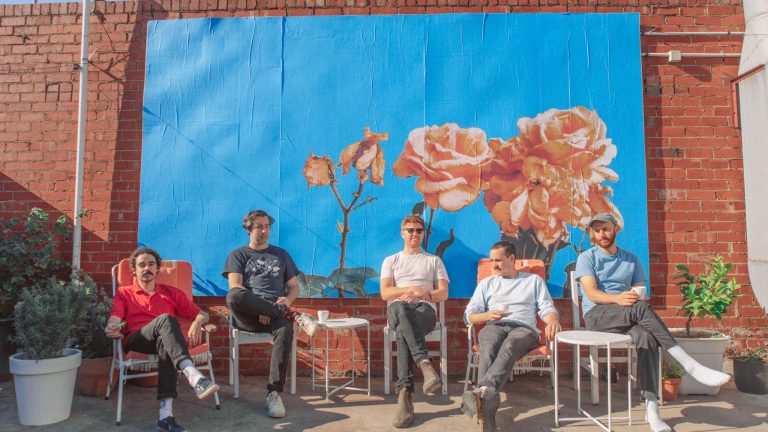 On ‘Sideways to New Italy’, Melbourne’s Rolling Blackouts Coastal Fever remain incapable of creating a bad song. Over multiple EP’s the band’s playful and consistent jangle pop sound has already amassed a dedicated local following, long before their debut record ‘Hope Downs’ had ever been heard. Following that record, and now ‘Sideways to New Italy’, they have established themselves at the forefront of modern rock music. With fans the world over; from Old Italy to New.

Australia’s long ocean view roads, beautifully sparse rural paths and gorgeous sunny summers, make it one of the worlds greatest places to wind down the windows and head on a road trip. Rolling Blackouts’ music provides the soundtrack to this sun soaked feeling of joy, bliss and starry eyed freedom and opportunity. ‘Sideways to New Italy’ holds a memorable guitar riff around every corner and more catchy hooks than Rex Hunt’s Fishing Adventure.

Similar to almost all jangle pop bands, the legacy of The Smiths and R.E.M cannot be denied. The band, however, have developed a clear and unique sound. This record incorporates soft dreamy touches and pastoral psychedelia like Angus and Julia Stone and Flaming Lips, as heard on ‘Sunglass at the Wedding’. ‘The Only One’ introduces the harmonica, which in combination with jangling guitars and a heavy Aussie accent create a joyful sun soaked country sound. Moreover, RBCF utilise walls of guitars and patient jam sessions throughout the record that recall The War on Drugs’ Americana. It is this guitar work that defines both the album and the band; effortlessly providing the most instantly gratifying jangle pop riffs since Johnny Marr himself. Consistently, the group reap the rewards of having multiple gifted guitarists. Weaving in and out of each other with the harmony and grace of ballerinas performing Swan Lake, or the inches from chaos of weaving Formula 1 cars. Each track’s guitar work is just as memorable as the vocal passages, with many highlights such as ‘Cars in Space’ where the group allow themselves the time to improvise and riff freely.

Lyrically, ‘Sideways to New Italy’ is at times immediately relatable, but more often cryptic and poetic. This elevates the group above some of their more surface level contemporaries. The ‘New Italy’ referred to in the album’s title is a small road stop cafe and Italian cultural museum along the highway between Sydney and Queensland, whilst being a gimmicky pastiche, is generally appreciated and enjoyed. The record investigates both personal change, and the ways we and the people around us have developed in unpredictable and at times disappointing ways. Often a shift not forwards, but sideways. New Italy; the roadside, fast-food take on one of the world’s most ancient cultural epicentres represents a satisfying, accessible alternative. As such ‘Sideways to New Italy’ as a record focuses on the idea of sacrificing dreams and authenticity for peaceful ignorance. Though through positive phrasing and musicianship, this message is felt as a celebration of individuals ability to find happiness in many ways, even those that may not make sense to others.

Some may find joy in the canals of Venice, others can find it on the side of a highway in Ballina. Listen to this album and you’ll find it wherever you are.