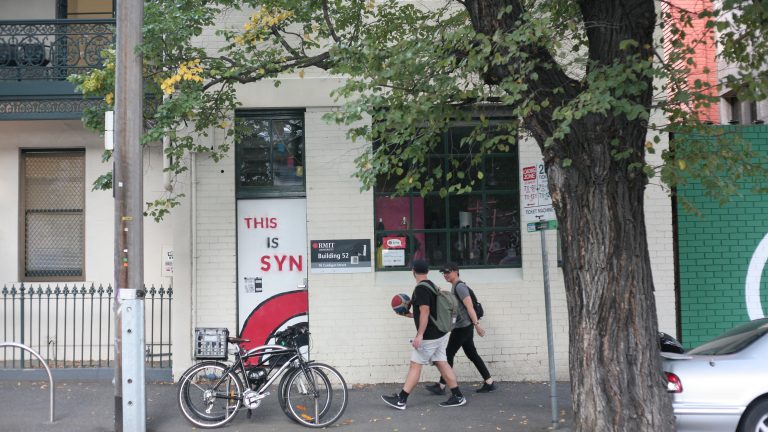 Hi I’m Rebecca, and I’ve been involved with SYN since October 2015. Here’s a piece I wrote about SYN I would like to share in support of the National Day of Action to #KeepCommunityRadio !

The words “ON AIR” flicker delicately, emitting a red glow, illuminating what is otherwise a dull and silent corridor. It’s a-quarter-to-six on a Tuesday evening and a group of school kids are wrapping up their program Amplify at SYN’s FM studios. It is unlike any image you would find at other broadcast suites in Melbourne, or perhaps the country – three school aged kids, all under 18 broadcasting live to air about issues and topics that matter to them… and not a single adult in sight telling them what to do, or how to behave.

The Student Youth Network, known simply as SYN are a media organisation, based in Melbourne, Victoria reaching a local and national audience via the airwaves of SYN 90.7FM and SYN Nation – a digital station which recently celebrated one year on the DAB+ FM circuit. So why were the Amplify group able to have next to free reign over the broadcast studios? Everyone involved with SYN –  the nine employed staff, trainers and the six-hundred or so volunteers are under the age of 26, and apart from the occasional teacher accompanying a Schools on Air group to their training, SYN is completely void of any “oldies” outside of that age bracket.

SYN exists on the premise that they give a voice to the youth often overlooked in mainstream media, by connecting the couple hundred registered volunteers to technical equipment, training, and spaces to make radio, TV, and even branching out into the digital content sphere. One of these spaces is known as The House of SYN and at 16 Cardigan Street, Carlton you’ll find it. You’ll know where to find it too. Underneath an unassuming row of brick, university owned and labelled buildings The House of SYN can be seen from afar – with it’s freshly sprayed, hand made logo “THIS IS SYN” in a fiery red and equally determined black font. As with most things SYN-related there’s a story behind this door and the people behind it…

… As told by a SYN volunteer presenter “the door had been as it was for years, graffitied with our logo to let everyone know who we were and what we do… it was welcoming… it meant all the volunteers knew where to find us, at our ‘house’…” However, a few weeks ago property services had come without warning and painted over the door, sending a message loud-and-clear through this action that the signage was no longer welcome. True to form, and within a matter of hours a few staff members and volunteers rustled up loose change and acquired spray paint, some makeshift stencils and quick thinking to reconstruct the lost signage. Although noticeably different to the previous door, its recreation served as a message. We are SYN, we are a community, and we won’t be bossed around!

SYN is unlike many media outlets that currently exist. Besides being run entirely by the youth – the station holds 5 core values – accessibility, to all youth to become involved in the SYN community, independence from commercial biases and other ‘pressures’, participation of the youth at all levels within the organisation from training, creation of media content and governance. 2 SYN also encourages diversity in ideas and perspectives, cultures and attitudes expressed. Finally, innovation – something so immediately evident in everything with a SYN logo attached to it.

The benefits of participating in the community broadcaster are noted not just by those directly involved with the group. (3)A detailed study by the Swinburne Institute for Social Research and the ARC Centre of Excellence for Creative Industries and Innovation found that of those who had been involved with SYN in their youth and who were employed at the time of the survey, “half were working in the creative industries, with one third working as media professionals.”

This data provides some much needed optimism for young people like myself who want to work in aspects of the media in the future. It seems we’re always told, as students of media that the industry is too competitive, it is as though you shouldn’t even try. SYN gives me a different perspective. We are in control and we have the tools, the skills and the platform to be broadcasters ourselves. Not only does my work with SYN compliment what I study, I am gaining the skills to use across media now, and in my future career.

If the spray-paint-door-saga says one thing about SYN, it is the youth are taking back stereotypes. They are not anonymous figures in the night who wear hoodies, vandalising train stations. They are however, leaving their mark within the media in a very “SYN” way, further emphasised by little tropes –  the bumper stickers, the “I have a face for radio” badges blu-tacked to computer screens, the drawing on tables, the irony in the pop culture references scattered around “the house” and studios. The anecdote of re-painting the door left me with the impression that there is always a higher authority or road block that will devalue what the youth are saying.

Thanks to organisations like SYN, young voices will be heard, stories will be told and –  what the youth are saying, making and broadcasting will break barriers of stereotypes, build connections, and continue to go beyond what is expected of young people. It is difficult not to ignore the rebellious spirit that is carried within SYN. Indeed, anyone that doubts the power of the “yoof” might be stirred and stunned by their capabilities. (4)

4 “Yoof” –  a colloquial term for youth used often around SYN by its volunteers and staff members.