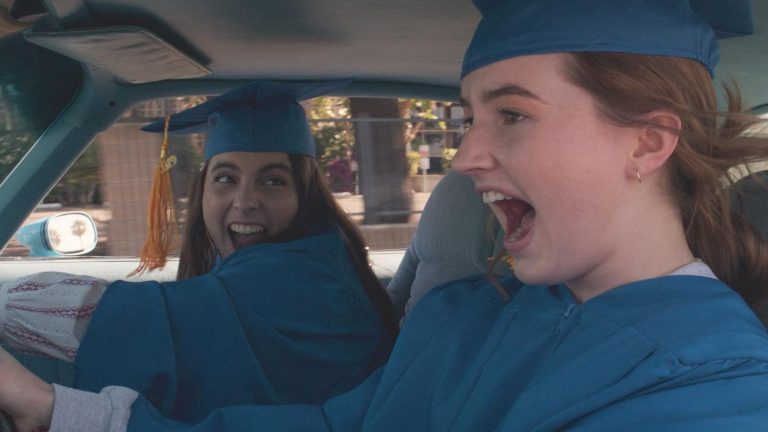 Coming-of-age is the genre that just won’t disappear, and with good reason – it never seems to be exhausted of original ideas or compelling narratives. Continuing that tradition is comedy that sees women take the spotlight, delivering a screenplay that all cinemagoers can empathise with.

It’s the last day of high school for best friends Molly (Beanie Feldstein, Lady Bird) and Amy (Kaitlyn Dever), two overachievers who are indifferent to the social lives of their peers – even now, they are more concerned about issues of school governance, much to the chagrin of staff and students. Molly and Amy’s diligent attitudes have seen them excel in their studies and resultingly accepted into prestigious universities, which comes as no surprise to anybody.

What is surprising, though, is that many of their classmates are also heading to esteemed colleges, despite their lackadaisical approach to education. Molly is furious upon learning this fact, emboldening her to take part in all the activities she previously refrained from, like attending an unsanctioned party. Despite her indifference, Amy opts to join Molly on her evening of hyper-socialising, and so begins a series of strange turns and wacky shenanigans.

Booksmart is very much a female-led movie, not just in terms of its cast, but its crew as well, boasting a writing team of four women, a majority team of female producers, a female co-editor, and a female actress-turned-director in debutant Olivia Wilde. Resultingly, the picture has a tone that’s proudly and unapologetically feminist, passing the Bechdel test with flying colours, making references to prominent female figures and having two vibrant protagonists in Molly and Amy.

Of the duo, it is Molly who proves the more memorable character, enacted with unconstrained energy by Beanie Feldstein; her counterpart, Amy, possesses only a fraction of that gusto, but performer Kaitlyn Dever does well at conveying her apprehension and reservation. It’s when Feldstein and Dever come together that their acting talents are most evident, sharing genuine chemistry, freely bouncing off each other and providing some of Booksmart’s funniest moments.

Since its release in North America a couple of months ago – and subsequent distribution in Australia last week – many commentators have noted similarities between Booksmart and another teen-focused comedy, Superbad. Both films have two friends attending parties on the eve of graduation, constant swearing and crude sexual humour, yet to claim that Booksmart is merely a gender-swapped Superbad is doing the film a great disservice, for it is much smarter than that.

One major difference is that the aspirations of Superbad’s characters revolve around sexual conquests, which is not the case with Booksmart; instead, Molly and Amy are guided by the simple ambition of having fun. Booksmart also has a much kinder view of high-school life, demonstrating how interconnected and fluid relations can be between classmates. Yet another distinction is that Superbad said nothing about the academic achievements of its protagonists, whereas said achievements play a prominent role in this screenplay.

The dilemma that Molly and Amy face is a universally-recognisable one – everybody has a story about diligently completing a task to their best effort, only to be informed of another, less prudent individual who managed to accomplish the same task with minimal care, whether that be in school, university or their occupation. In that sense, Booksmart serves as a cathartic, validating experience, particularly for viewers who are still making their way through the education system.

Booksmart is a highly resonant picture that encapsulates a struggle faced by oh-so-many adolescents. Additionally, there’s enjoyment to be found in the dynamic between Feldstein and Dever, as well as the actors who make surprise appearances, factors which position the film in the upper-echelons of coming-of-age comedies.