SYN Reviews: Come From Away 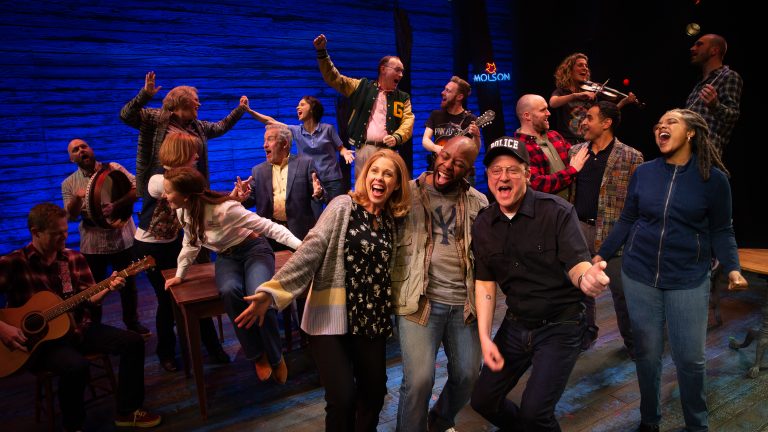 One of the most hyped and advertised shows in Melbourne is worth the hype. Come From Away is a funny, authentic and beautifully crafted show.

The show explores 9/11 and the aftermath however instead of it being set in New York it takes a different perspective, looking at the people who landed in Newfoundland, Canada. The result is a story about cultures mixing and the generosity of the townfolk in the remote town.

The character work in this show is something to be specifically acknowledged as all of the main cast played multiple roles and nailed their accents. Their ability to switch characters quickly and believably helped keep the audience entranced. The show’s dialogue acted as if it was verbatim from the townfolk, pilots and passengers; it helped to create authenticity, and explore humanity.

Performances that particularly stood out were Nicholas Brown and Kolby Kindle. Nicholas Brown played a wide range of characters with different positions such as a gay passenger who wasn’t satisfied with his partner, as well as a Muslim passenger who is treated very suspiciously by security, passengers and airport staff. Kolby Kindle had an incredible comic timing with his characters and really came into each character – he was a delight to watch.

Technically this show was a masterpiece, an amazing use of set pieces particularly with the wooden chairs and an extremely impressive amount of lights that seemed to be able to light the stage in any way. The way I could not recommend this is if you are superstitious when flying and are flying soon as it does emphasize that this is a true story, including the moments when they were stranded on a plane for more than a day.

This performance is a must-see musical that will leave you curious about the true story as well as warm in your heart.

Come From Away is showing at the Comedy Theatre until October 6th.