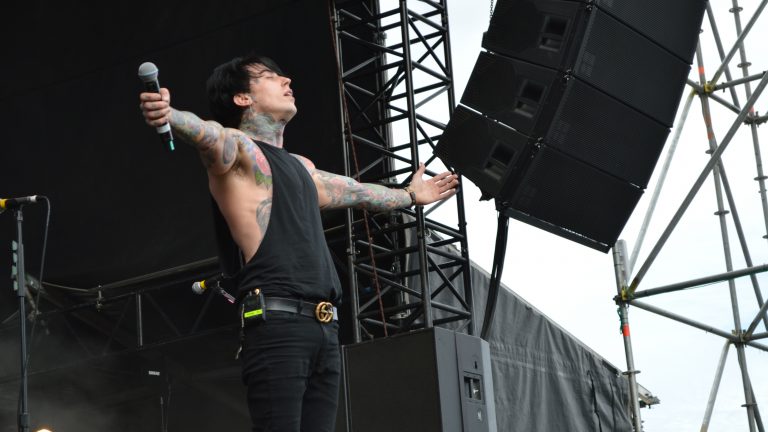 In a sea of fog, Ocean Grove opened the main stages for the inaugural Download Festival. A huge crowd came down early to see the Melbourne locals as they ripped through track after track from their huge debut album The Rhapsody Tapes. They were nothing short of entertaining throughout the whole set by keeping the crowd involved by throwing out giant beach balls and rolls of toilet paper. While they might seem like cheesy gimmicks, it all added to the experience to the high energy and fun that you would expect from a typical Ocean Grove set. ‘These Boys Light Fires’ and ‘Mr Centipede’ were highlights and it was clear they’ve become classics with Ocean Grove fans already.

Opening with an oldie but a goodie, Northlane pleased the O.G. fans with ‘Quantum Flux’ before transitioning into newer material. With the release of Mesmer in 2017, Northlane had toured consistently before announcing they’re going on hiatus after their appearance at Download. With the fact that this could be their last set on Australian shores for quite some time, the bar for their set was high. Marcus Bridge is a fantastic front man and didn’t let a single person down.

Though crowds were still forming from the torrent of fans still in line, Psycroptic roared their way through their set.  All members of the four piece executed their music with absolute precision, displaying a professionalism and ability developed over nearly two decades. Frontman Jason Peppiatt in particular knows how to handle a crowd, encouraging circle pits and a wall of death just as the day reached it’s centre. The audience was constantly moving, reaching a crescendo as Lochlan Watt took to the stage for a duet of some of their older, more extreme material. It was all capped off by the sight of a person in a wheelchair crowd surfing, a rather extraordinary moment which would be replicated several times across the day.

Frontman Jason Peppiatt in particular knows how to handle a crowd, encouraging circle pits and a wall of death just as the day reached it’s centre.

Trophy Eyes are all class. They played on the only stage that wasn’t outdoors and they completely packed out the whole tent. Their set was really something special. It seemed like everyone there knew every word and sung back to vocalist John Floreani the whole set. They were followed up by fellow pop-punk heavyweights, Neck Deep. Neck Deep are fresh from the UK on the back of their fourth album The Peace and the Panic. Their performance of ‘In Bloom’ was truly an emo experience and everyone felt the emotion poured into the performance by singer Ben Barlow.

Sabaton, power metal giants, began a quartet of bands to appeal to traditional metal fans. The band was met with chants, a sea of hands and the sing-along a that their music demands. They knew how to have fun, something that can be missing from the very serious stage acts of many in attendance, brawling and joking even as they played. Although their music often harkens to European history, they brought some local flair by rolling out one of their lesser known tunes, ‘Gallipoli’ for the occasion. Gojira followed them with a performance heavy with many of their more recent songs, their performance bringing forth fire which flared up from the onstage and heating up the crowd with their trademark combination of odd tones and headbanging riffs which.

They knew how to have fun, something that can be missing from the very serious stage acts of many in attendance, brawling and joking even as they played.

Much like their previous European brethren, Amon Amarth know how to put on a show which appeals to the larger crowd of such a large event. Spinning tales of Vikings accompanied by melodic guitars and the gruff style of vocalist Johan Hegg, they invited the audience to ‘Raise Their Horns’ as Johan Hegg raised his own natural one in true Nordic fashion. Mastodon rounded out the four with an impassioned performance which darted across their career, playing newer tracks such as ‘High Road’ and classics like ‘Blood And Thunder’ in a seamless setlist. Their distributed vocal duties brought a refreshing dynamic, each song possessing a different quality, almost as if was an entirely different band playing on certain songs.

As far as throwbacks go, Download was full of them. The weather had well and truly cleared up and the sun was out an about for Falling In Reverse. The crowd was loving the old classic ‘The Drug In Me Is You’ as well as their new material. Ronnie Radke hasn’t changed his look in the slightest as it was like we took a trip back to the early 2000s. The ultimate pop-punk throwback for the day was undeniably Good Charlotte. They were probably the act of the day that nearly every punter could enjoy. Everyone knew at least one song, if not all, and they were the perfect party band to transition into a night of huge acts to follow.

The ultimate pop-punk throwback for the day was undeniably Good Charlotte. They were probably the act of the day that nearly every punter could enjoy

The remainder of the night on the big stages was dominated by metal nostalgia from the early 2000’s, Limp Bizkit, Prophets Of Rage and Korn. Limp Bizkit delivered a slightly bewildering display, extending tight tracks to new lengths where Fred Durst attempted to elicit responses from the audience and wandered into the crowd. While these can often be some of the most exciting moments of a live performance, in this instance they felt like they lacked the deft touch that the show demands. However, it was undeniable what power the songs had when they were played, the front of the crowd bouncing along to every bass heavy crunch of tunes like ‘Rollin’. Prophets Of Rage, with dual vocalists Chuck-D and B-Real, hit almost as hard, playing a mixture of new Prophets and old Machine songs. Finishing their set with ‘Killing In The Name’, it lacked some of their studio power, not quite sounding right with the differing vocal delivery, but it went off with the crowd and they still provided the cathartic experience that the audience demanded.

However, it was undeniable what power the songs had when they were played, the front of the crowd bouncing along to every bass heavy crunch of tunes like ‘Rollin’.

Korn were at the top of their game. The stage came alive for the headliner, an array of neon and amplifiers which shone perfectly as the night reached its darkest point. The crowd swelled and moved to some of their most well known and catchiest songs, particularly ‘Falling Away From Me’, and it was undeniably obvious why even after nearly 25 years they headline some of the biggest heavy music events in the world. Their new sounds hit almost as hard at their classics, energising a group already weary from a long day of music to party until the end. Unfortunately, their set finished 15 minutes earlier than stated, leaving the audience confused and stranded as they considered whether they might wait in hope for another encore, or to accept what slowly became inevitable; that this would be the end of their long day and night.