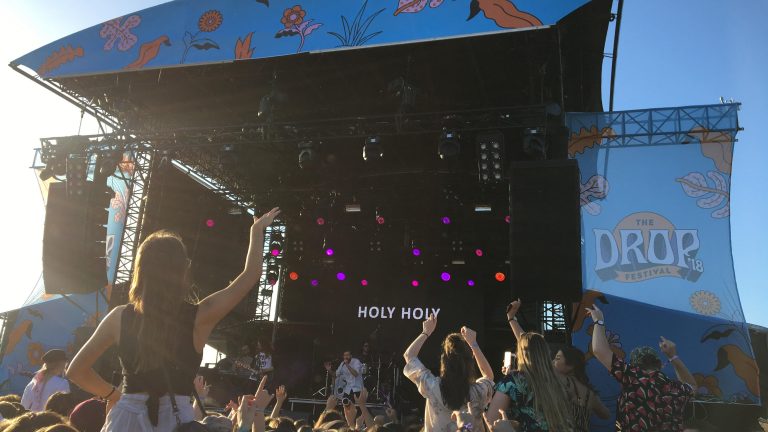 The sound of seagulls filled the air and set the tone for the inaugural The Drop festival, which was celebrating Australian music and the Australian coastline. The Victorian leg, held in Torquay, coincided with the iconic Ripcurl Pro, and pinpointed the Great Ocean Road as the place to be this Easter weekend. The event boasted an all-Aussie line up, featuring the Cronulla newcomer, Ruby Fields, and the local festival staples, San Cisco.

The afternoon began with the beachy riffs of self-described ‘average chick’ Ruby Fields. Following the release of her debut EP, Your Dad’s Opinion For Dinner at the beginning of the month, Fields has gained a lot of attention since uploading her first track ‘I Want’ onto Triple J Unearthed on April 4, 2017. In just 24 hours after the upload, she had tripled her online followers. One thing that has surely captured the ears and hearts of the punters wise enough to head down early for her set, are her relatable lyrics, stating she wants to be ‘more than her ATAR’ in certified jam ‘I Want’.

Wowing the crowd with her own version of Garbage’s ‘Cherry Lips’, Fields ended her set with one of her biggest tracks, ‘P Plates’. It was during this that a girl appeared on the shoulders of a friend, in a watermelon printed jumpsuit, with a matching watermelon bucket hat, and eating, you guessed it, a huge chunk of watermelon, one of my top sights of the day. While Fields had the earliest set of the festival, she truly set the scene for the endless energy of the day.

It was during this that a girl appeared on the shoulders of a friend, in a watermelon printed jumpsuit, with a matching watermelon bucket hat, and eating, you guessed it, a huge chunk of watermelon, one of my top sights of the day. 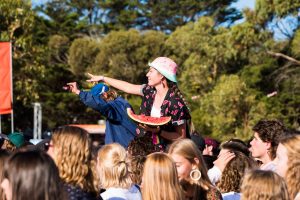 Holy Holy took to the stage next, their mesmerising sound taking the growing crowd on a journey of creative synths and intricate guitar work. Showcasing many of tracks from their 2017 album, Paint, the five-piece had the crowd grooving in the late afternoon sun. A highlight of their unfortunately short set was certainly in one of their catchiest, folk-inspired songs from Paint, ‘Elevator’, showcasing the energy of the band. This album now features three extra permanent band members, in addition to lead singer Tim Carroll and guitarist Oscar Dawson. You can certainly feel the added members to the band in their new work, rather than focussing solely on the smooth voice of Carroll and twangy fretwork of Dawson, their new work captures a whole band feel, particularly seen in the perfect driving song ‘True Lovers’.

The whole crowd rejoiced and prepared their voices to join in on Holy Holy’s BEYutiful (thank you) cover of ‘Hold Up’ by Beyonce. Tackling such a bold cover is a very brave move, but the boys certainly held their own against the iconic Queen B. Originally developed for Triple J’s Like a Version, the boys truly turned the song into their own, focusing on the strengths of their laidback guitar work. Holy Holy certainly had the crowd saying Holy Moly at their set.

West Coast feel-good indie rockers, San Cisco, hit the stage next, truly the perfect band to play the perfect sunset slot. This was one of their first tours with new bass player, Jenny Aslett, after original member, Nick Gardner, left the band at the end of 2017, to a very sad crowd at Beyond the Valley festival. The new ensemble certainly didn’t disappoint, the entire crowd dancing to the kooky synths and retro beachy vibes coming off tracks like ‘Slomo’ and ‘Hey did I do you wrong’. While their most recent album, 2017’s The Water, doesn’t move too far away from the dreamy pop they are known for, the greater use of disco-inspired synths distinguishes this work from their earlier albums. This is especially seen in the warped synths of ‘The Distance’ and ‘Make me Electrify’ which continued to get the crowd moving.

It seemed as if San Cisco were also handed a short set, their set seeming to end after only a handful of songs. Luckily, they ended on a crowd favourite, ‘Too much time together’, encouraging the crowd to groove and sing along with their friends.

The coastal whimsical pop San Cisco are so well known for was the perfect accompaniment for their timeslot and the aura of the event. The festival, occurring alongside the Ripcurl Pro and a mere 700m from the beach, was very much a family event, with entire ‘kid zones’ and many a child spotted in huge headphones bouncing on the shoulders of a parent.

As the sun had set, party boys Dune Rats took to the stage, ready to turn the evening into a true party. Kicking the set off with ‘6 pack’ and ‘Red light Green light’, the Brisbane boys turned the energy dial of the day truly to its max. As the crowd grew, so did the party, with the festival’s light technicians strutting their stuff during the set, beaming lights into the crowd, complementing the large tunes on stage, and the animated caricatures of the boys behind singing along. The caricatures then joined the crowd in belting one of the Dune Rat’s most iconic songs ‘Scott Green’. The grungy, catchy guitar and relatable lyrics that the Dunies continue to produce is what keeps their fans coming back for more, as well as the rowdy party vibes the boys create within their sets.

The caricatures then joined the crowd in belting one of the Dune Rat’s most iconic songs ‘Scott Green’.

Rounding out the night was the experimental indie-electronic trio, SAFIA. This was an exciting addition to the line-up, as the boys have recently released two singles, ‘Cellophane Rainbow’ and ‘Freakin’ Out’, yet have not locally toured since taking their debut album, Internal, around the country in 2016. While torturous for fans, the long break elevated the excitement in the crowd, clearly excited to see the boys bring their album to life. This is one of the most entertaining things about seeing SAFIA live, as I have quite a few times due to being a high-key big fan, as all of their production is live, despite the large electronic sound created. You also can’t go to a SAFIA gig and not acknowledge the voice of singer, Ben Woolner, with one of the greatest vocal ranges I have ever seen, somehow able to handle everything from deep, soulful lines to angelic notes. The talent on stage was complimented by incredible visuals and lights, particularly during crowd favourites ‘Make them wheels roll’ and ‘Counting sheep’. Ending on one of their most popular tracks, ‘Embracing me’, the crowd did not need any further encouragement to dance to the whimsical synths and energy pouring off stage.

There is often a stigma with a new music festival popping up, as many debut festivals are too ambitious and poorly planned (and never have enough portaloos). The Drop certainly broke that stereotype and certainly completed what they set out to do: host a community-friendly event showcasing local Australian talent.