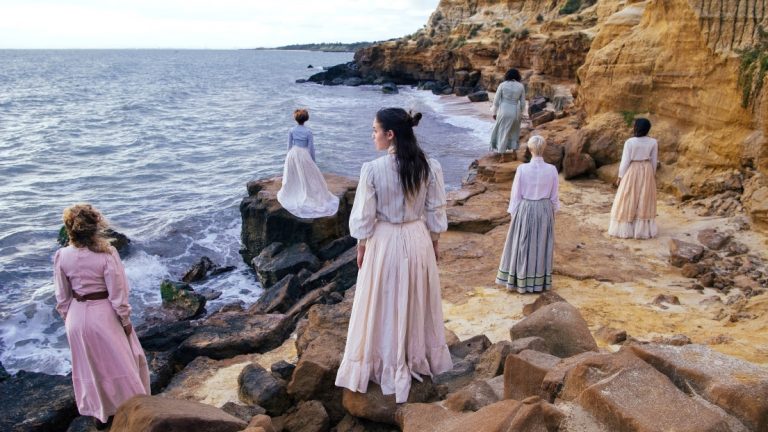 A SHE SAID Production.

Fallen, the latest production by theatre company She Said, sends its audience back to 1840s London when Australia is beginning to be established as the place to be sent for a fresh start at life. Fallen (written by Seanna van Helten and directed by Penny Harpham) is performed on a 360 degree set, with the audience totally surrounding the action, and follows five underclass and destitute girls who are being trained to be sent to Australia as maids and wives. 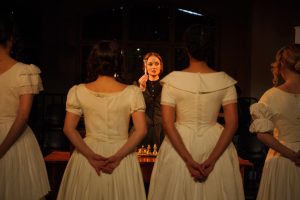 The play draws its inspiration from the history of London’s Urania Cottage which was a home for ‘fallen’ women established and overseen by Charles Dickens in 1847. The five girls in this play are ruled by their prim and strict but empathetic Matron (Zoe Boeson), and while away the days until their ship leaves for Australia by sewing, scrubbing, cooking and gardening. In order to be granted passage on the boats, the girls must forget about their pasts and cease to discuss them ever again. One of the best aspects of the writing of the play is the subtle hints at each character’s history that allows the audience to draw their own conclusions and interpretations. 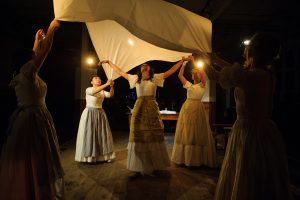 Chloe Greaves’ costuming is exquisite: long, pretty dresses, corsets and curled hair instantly highlight the time period of the play. Fallen is aesthetically beautiful, the imagery drawing parallels with other exceptionally designed period productions such as The Handmaid’s Tale and Downton Abbey. Greaves’ set design is simple but clever, with a cacophony of hidden compartments that fold out to reveal beds, pillows and vegetable gardens. Otherwise, the set consists of a mere table and chairs, but these are also dressed up at various times to create incredibly beautiful scenes. The atmosphere is complimented by impeccable lighting design by Rachel Lee.

She Said has put together a talented and diverse young cast who embody their young characters naturally and emphatically. They interact with each other as though they truly have lived together for years. For the most part, they all put on a flawless performance, maintaining momentum through the non-stop two-hour show that is filled with emotional outbursts and the occasional song and dance. British accents would have aided the audience in understanding the geographical setting, as the actresses often speak with very Australian accents which makes their country of location initially confusing to determine.

The play effectively conveys the idea of the power of stories, as the characters use their tales to manipulate the Matron into giving them what they want. What is lost in their performance, however, is the translation of the play’s stated underlying theme that your past shapes you and you cannot simply forget it. The girls seem happy to avoid thinking and talking about their histories until the penultimate scene when this idea is spontaneously brought to the fore. It was perhaps an accurate reflection of the majority of women in this era, but the girls are not portrayed as particularly strong willed or defiant, instead pleasantly accepting how they are instructed to behave and think. The play effectively observes and presents women as they were in the 1840s, which is not a favourable light but accurate nevertheless. 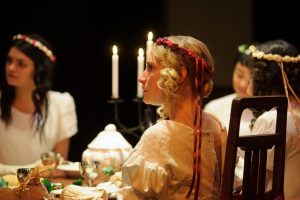 The ending of the play is interesting and presents several unanswered story threads that allow the audience to think what they want for the future of the girls. Overall, Fallen was an enjoyable and well-executed production. People who are interested in this era of history and fans of period theatre, film and books that centre on women’s struggles will love it.

Fallen is showing at 45downstairs (45 Flinders Lane, Melbourne) until the 26th of August. More information can be found here.