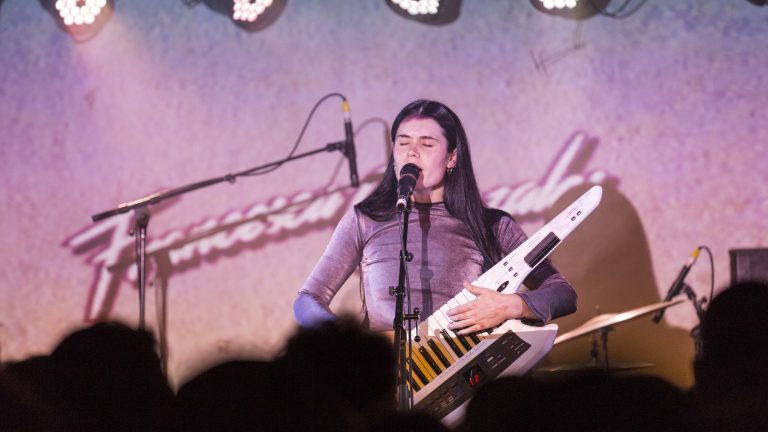 Passes provided by Publicists
Photos and Words by Julia Sansone

Singer/songwriter Francesca Gonzales graced Melbourne’s Evelyn Hotel on a bustling Thursday evening, as part of her “Baby Give It Up” single launch.  The feel-good party track with a powerful message is a song Gonzales wrote after an uncomfortable incident at a music festival where she was asked to dance.

As she began talking to friends about this, she realised that most people had gone through similar situations at festivals and gigs. As a result, she wrote the song as a message to people who don’t take no for an answer. “If someone asks you to stop, then stop.”

The track was produced and mixed by Matt Neighbour, who has worked with the likes of The Avalanches, Courtney Barnett and Matt Corby. “Baby Give It Up” will be worked into an EP, due out in April this year.

The venue was buzzing with a crowd excited to see the soulful, graceful and captivating singer. Kid Heron provided a taste of what was to come and set the mood for the night. Bathed in a red and blue glow, the artist from Sydney and Gonzales performed as a duo with stripped back and low-key jams.

Dhana Bhutan also supported the evening, providing an eclectic, performative set, with the occasional saxophone solo filling the room with jazz vibes. The duo from Melbourne describe their music “like drinking a cup of tea at Revolver”, a combination nobody expects, but is delightfully satisfying.

But the most extravagant of all was the live performance for Francesca Gonzales. The large band, dressed all in white, showcased an unexpected variety of instruments. Everything from saxophone, clarinet, percussion, singers to world drums, Gonzales emerged onto the stage with a keytar around her. It felt like an almost angelic atmosphere. Gonzales warmed up the crowd with slow, soulful ballads, showcasing her stories of love and loss.

Finishing the night with “Baby Give It Up”, Gonzales invited the crowd onto the stage for a dance. Bathed in a rainbow of pink and purple tones, the band and crowd sung in unison, elevating the experience from merely a performance into a full blown dance party; retro sunglasses on, shoes off, and flowers being thrown up in the air.

Songs played like Candi Staton’s 1976 classic “Young Hearts Run Free and “Honey I Believe” by Yolanda Adams turned the crowd from strangers into friends. The atmosphere of the venue was packed with an overwhelming amount of love, support and pure joy to be celebrating life, with such talented musicians and storytellers beside them.